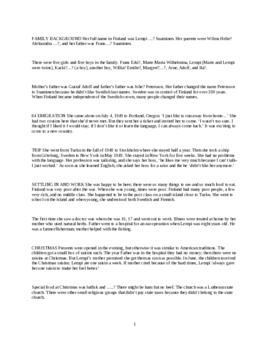 Lempi Forman was born on a small island close to Turku in southwest Finland. Her father was a farmer/fisherman, and there were five girls and five boys in the family. Growing up, Lempi experienced many hard times due to World War II. Money was scarce, and she says people did not know what to do or how to run their country once the war ended.

In the fall of 1948, Lempi moved to Stockholm, where she stayed for half a year, and then immigrated to New York in May 1949. She stayed in New York for five weeks and worked in a tailor shop. On July 4, 1949, she went to Portland, OR, where she had two cousins. Lempi met her husband on an ocean ship where she later worked and had one son, David. Every time she visits Finland, she returns to her home place, but would never want to live there again.