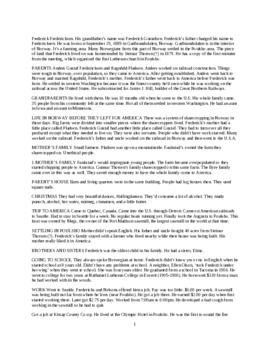 Frederick Fredericksen was born on September 29, 1889 in Gudbrandsdalen, Norway to Anders Gustaf Fredericksen and Ragnhild Pladsen. At this time, a system of sharecropping existed in Norway, and large farms were divided into smaller pieces on which the sharecroppers lived. The sharecroppers had to turn over everything they produced except what they need to live. Frederick's father had a place called Gustaf and his mother had a place called Pladsen. The Faukstad family, whom Frederick describes as 'unethical people,' owned Pladsen. The Faukstad's often impregnated the young girls, and the farm became so over-populated that they started shipping people to America. As the area grew in size, Frederick's family decided to immigrate to America on their own accord. Frederick's father went to America and worked on railroad construction. When he was established, he returned to Norway to marry Ragnhild. Anders then returned to America before Frederick was born and settled in western Washington. Frederick and Ragnhild joined him when Frederick was ten months old. The family, along with many other Norwegians, settled in Poulsbo, WA. There, Frederick's younger sister Elmo was born. The family always spoke Norwegian in their home, and Frederick did not begin to learn English until he started school at the age of eight. He graduated from a school in Tacoma in 1904 and then went to a Lutheran college in Everett for two years. After college, he got a job at a sawmill in Seattle and then became employed at the Kitsap County Co-op. A friend, C.F. Richards, later talked him into buying a recreation center in Waterville, WA with him, but Frederick did not like it there and eventually returned to Poulsbo. The day after he returned, he left for Alaska with his father and brother. He had intended to go fishing with them, but as they were traveling to Valdez, the boat stopped in Cordova and Frederick ran into some friends who invited him to stay in Cordova and play baseball with them. Frederick had played baseball with them in Poulsbo and decided to stay. The team's manager found a job for him at a local department store. This was in 1917, and Frederick remained in Alaska until 1939. Before coming to Alaska, Frederick had dated an actress named Eunice, and when she wrote to him in 1937, he returned to Washington and married her. Eunice, however, did not like Alaska, and in 1939, they bought a hardware store in Eatonville, WA. The hardware store did rather well, but when the war started, Frederick was asked to return to work in Alaska. Although he regrets the decision now, he went back to Alaska, and Eunice went to stay with her mother in Los Angeles. Shortly after the move, Eunice fell ill and only lived for another six months. After Eunice passed away, Frederick became an auditor for the Army Engineers and then worked as a traveling salesman for fifteen years. Frederick never returned to Norway, but continued to write to a cousin there and was a charter member of the Sons of Norway in Poulsbo.