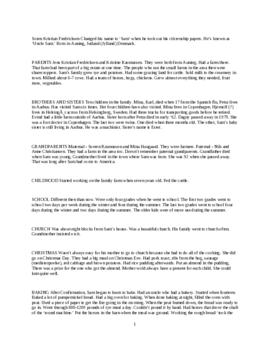 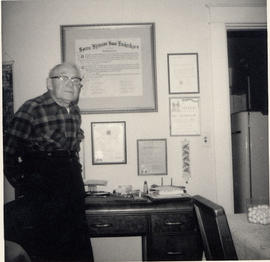 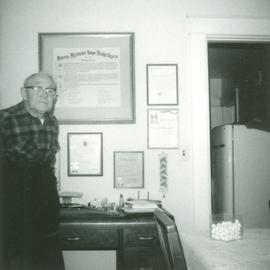 Sam Fredricksen was born Søren Kristian Fredricksen on September 23, 1885 in Auning, Jutland, Denmark to Jens Kristian Fredricksen and Kristine Rasmussen. He was one of ten children, and the family lived on a farm, where they grew rye and potatoes. The church was eight blocks away from Sam's house, and the family attended often. After Sam was confirmed at age fourteen, he began to learn how to bake from his uncle who owned a bakery. He worked there until his uncle passed away two years later. Sam then began farming and met his wife, Margaret Petersen, on one of the farms he worked for. Margaret was a cook.

They were married April 28, 1923 and left for America on May 1. To avoid the quota in the United States, Sam and Margaret got papers for both Canada and the United States, settling in Calgary, Alberta first. In Calgary, Sam continued farming and later got in touch with his uncle in Granite Falls, Washington. Sam's uncle had a threshing outfit, and Sam began working for him. Sam's uncle eventually went back to Denmark, and Sam began working in the woods at that time. He did this for two years, earning enough money to buy a house for himself and Margaret. Sam also worked on a dairy farm for six months in the Seattle area but later returned to Granite Falls, as did his uncle. Upon his return, Sam's uncle bought back a bakery he had once owned, and Sam began working for him once again.

In 1934, Sam got the bakery after his uncle passed away and ran the business successfully until 1941. He and Margaret then moved to Everett, Washington, where Sam owned the Colby Bakery until 1954 and a wholesale bakery in Granite Falls. After he sold his bakery, he worked for a friend's landscaping operation for twelve years and then did landscaping on his own. Sam finally retired when he was eighty-five years old.

In addition to work, Sam has been very active in church and Danish organizations, including the Danish Brotherhood, the Eagles, Danish Club, the Danish drama club 'Harmonien,' and the Danish folkdance group. Sam has also served as the Washington correspondent for Bien, a Danish newspaper printed twice a week in Los Angeles. Sam's heritage has been very important to him. He has made five trips back to Denmark, and he and Margaret have maintained Danish traditions within their household. Their only child, Ann, speaks Danish.