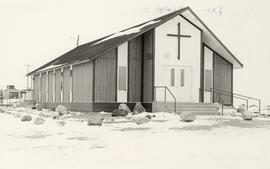 This congregation was organized in 1910 and services were held in the Congregational Church (which Galata purchased in 1928). Rev. Kjos was the first pastor, holding services once a month as he served territory which included Joplin to the west, the Canadian line to the north, and the Marias River to the south. The church was remodeled with an addition to the chancel in 1949, and additional renovations were made in 1957. Discussion and approval to build a new church took place at the 1979 annual meeting. It was completed in the summer of 1981. The stained glass windows were designed and built by Pastor Kenneth Bartle. Upon completion of the new edifice the old church was demolished, but the bell tower was saved and is now used as a community and church bulletin board.