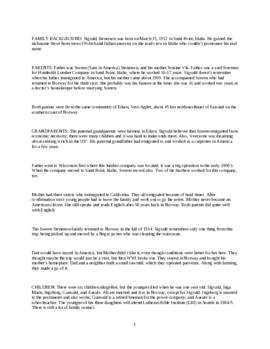 Brynhild Kjøsnes Garberg was born on March 30, 1894 in Selbu, Norway, a small community in Trøndelag outside of Trondheim. She was one of four children by Ole Kjøsnes and Sissel Kulseth. Her family immigrated to America in 1907 two years after her brother, John immigrated. Brynhild celebrated her 13th birthday aboard 'The Baltic' on her way to America. Brynhild's family settled in LaCrosse, Washington. After settling, Brynhild attended school for one and a half years in Lacrosse. She was confirmed in the Selbu Lutheran Church at age fifteen. Brynhild married Peder Garberg on December 14, 1921. They lived with her family until they rented a farm. They have four children, Clara, Irwin, Sadie, and Phyllis. In 1962, the Garberg's moved to Spokane when owners of their farm sold it. She was around 40 years old when she received her citizenship.