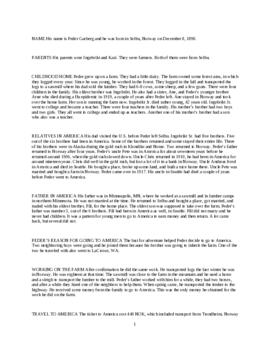 Peder Garberg was born on December 8, 1898 in Selbu, Norway to Ingebrikt and Kari Garberg. He was one of four children. Peder worked on the family farm until he left for America in 1917 with two neighboring boys. During his trip to America aboard the Bergensfjord, Peder witnessed a burial at sea. Peder went to LaCrosse, Washington because his friend had talked to someone in Norway who had been in LaCrosse before. The first winter in LaCrosse, Peder worked on the Wigen farm and stayed there until the next spring. Eventually, Peder leased a farm for 41 years until it was sold and then moved to Spokane, Washington in 1962. In 1921, Peder married Brynhild Kjøsnes in Spokane at the Old Holiday Hotel. Peder became an American citizen in 1936. Peder and Brynhild had four children: Clara, Irwin, Sadie, and Phyllis. Peder does not feel that there is anything special with the Norwegian's. He felt that a person's personality determines who the person is no matter where they are.