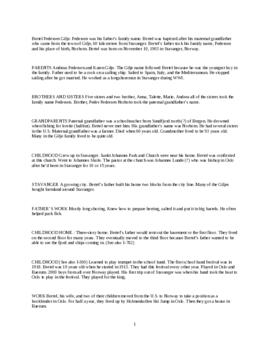 This interview was conducted with Bertel Gilje on July 21, 1982 in Tacoma, Washington. It contains information about family background, education, occupation, emigration, community activities, and Norwegian heritage. Also available is a letter from Bertel to Dr. Janet Rasmussen in regards to PLU's 'Scandinavian Immigrant Experience.' The interview was conducted in English.

Bertel Gilje was born on November 10, 1903 in Stavanger, Norway to Andreas Pedersen Norbotn and Karen Talette Gilje. Bertel's four sisters, Anna, Talette, Marie, Andrea, all took the family name of Pedersen, his brother Peder took their paternal grandfather's name of Norbotn, and Bertel, who was the youngest boy in the family, took his mother's family name. Bertel's father was a longshoreman, and the family had a three-story house, in which they rented out the first floor. The Church was near their home, and Pastor Johannes Lunde confirmed Bertel there. Bertel attended Stavanger public school for eight years, during which time he learned how to play the trumpet and participated in the school band. Rather than continuing on to a middle school like his brother and sister, Bertel went into a bookbinding apprenticeship after his eight years of public school. For four years, he went to technical evening school and was employed by a second generation German, who took Bertel and the other apprentices on trips to Germany, Denmark, and Sweden. Bertel's apprenticeship concluded in 1924, after which Bertel went to a trade school in Copenhagen for three months. In an effort to make a descent living, Bertel decided to immigrate to America in April 1927. After working in New York for a couple of months, he went to Minnesota, where he had an uncle. Bertel's uncle arranged a job for him with Augsburg's Publishing House, and Bertel joined the Bookbinder's Union. After three years, he returned to Norway, but later came back to America and found more bookbinding jobs. On his second trip to Norway, Bertel met his future wife, Julie, who was from Mandal, Norway. Julie was returning to Norway on the 'Stavangerfjord' and Bertel on the 'Bergensfjord,' but after the 'Stavangerfjord' lost its propeller in the middle of the Atlantic, it had to return to New York, and Bertel ended up on the 'Bergensfjord' with Julie. They were married in July 1936 in Norway and then moved to Brooklyn, New York, where their children, Oddrun and Karhild, were born. Not wanting his children to grow up in Brooklyn, Bertel and his family returned to Oslo, Norway in 1939. Upon this return to Norway, Bertel received his master bookbinder certificate and got a job managing a bindery. When World War II began, Bertel attempted to leave Norway again but could not. Due to German inspections and keeping up with what the Norwegian publishers wanted, work was difficult for Bertel during the war, and when the war ended, Bertel and his family returned to the United States. At this time, Bertel and Julie now had another child, Bjornulf. Bertel worked in Birmingham, Alabama and Spokane, WA before permanently settling in Tacoma, WA, where he worked for Pioneer Printing Company and the Washington State Printing Plant. In Tacoma, Bertel also joined the Normanna Male Chorus, the Sons of Norway, and Nordmann Forbundet, an organization for Norwegians living outside of Norway. He and Julie have visited Norway in 1975, 1976, 1977, 1978, 1979, and 1981, and after he retired, they began speaking mostly Norwegian in their home. According to Bertel, 'Har du noe aa si, saa snakk norsk,' which means 'if you have something to say, then say it in Norwegian.'