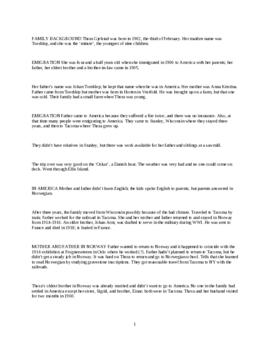 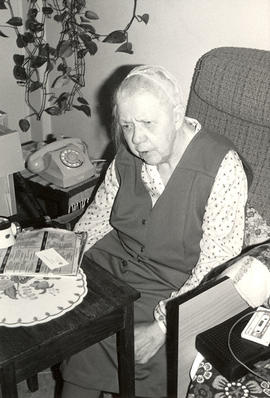 Thora Gjelstad was born in Toerklep, Norway on February 3, 1902. She was the youngest of nine children, and when she was four and a half years old, she immigrated to America. The family stayed in Stanley, Wisconsin for three years and then moved to Tacoma, Washington, where Thora grew up. From 1914 - 1916, Thora and her parents returned to Norway, where her father had planned to stay permanently. He could not find a steady job, however, and the three returned to Tacoma. By this time, Thora had finished school and got her first job in a restaurant. She later worked for a factory that made broom handles. Although she was not a part of any Scandinavian groups while living in Tacoma, Thora did participate in Norwegian festivals and meet many other Norwegians. In 1918, Thora and her parents returned to Norway indefinitely. She met her husband, Anders Gjelstad in Vestfold, Norway and was married for fifty-two years. They lived in Stabekk, outside of Oslo, and had two children. Thora's sister Sigrid and brother Einar continued to live in Tacoma, and Thora remained in contact with them. She also continued to keep some American customs when back in Norway and visited Tacoma with Anders in 1960.