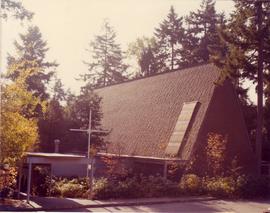 This folder contains a congregational historical record, a 1954 yearbook, a booklet from the service of dedication, a pamphlet encouraging giving towards the new church building, and a brief history of the church.

Twenty persons met in February of 1947 to discuss organizing a Lutheran Church. Services were held early that year in the Crabapple Restaurant. The congregation moved to the Bellevue Elementary School in August, where the first baptism and communion were celebrated. A homemade cross and candlesticks were used. On January 1, 1948 the congregation moved to the Chapel of Flowers, a wedding and funeral chapel. The congregation was formally organized in October of 1948. During the war Japanese property became available to lease or purchase. Grace purchased the Buddhist Church facilities and grounds. First services were held there on February 12, 1950, and dedication followed on May 21 of that year. Charles R. Bomgren served as pastor from 1956 until 1981. During this time the church facilities were sold and four acres purchased on 8th street.