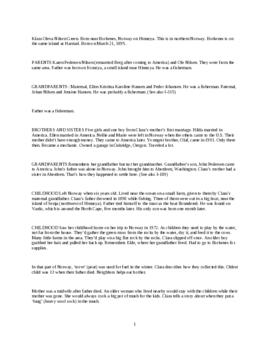 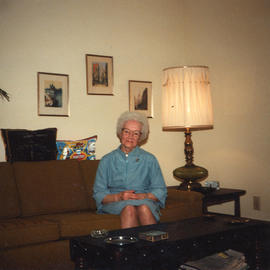 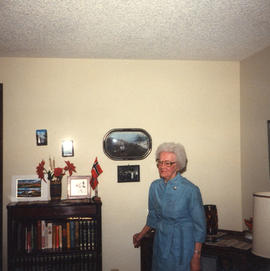 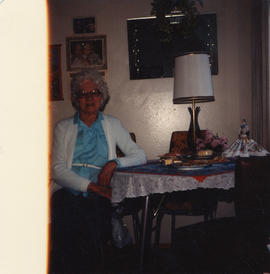 This interview was conducted with Clara Greene on March 25, 1982 in Tacoma, Washington. It provides information about her family background, emigration, settling in, schooling, work, marriage and family, and Norwegian heritage. The interview also contains an article on her father, Ole Mathias Nilsen, from a Norwegian publication, an article on Clara from Nordlandsposten, and three photographs of Clara at the time of the interview. The interview was conducted in English.

Clara Greene was born on March 21, 1895 in Elde, Hinnøya, Norway. Elde is in northern Norway near Borkenes. Clara's parents were Karen Pedersen Nilsen and Ole Nilsen, and there were five other children in the family: Hilda, Ellen, Nellie, Marie, and Olaf. Clara's father was a fisherman, and in 1898, he drowned near the island of Senja. Karen worked as a midwife after Clara's father died, and her sister encouraged Karen to bring the family to America, where they would have an easier life. Clara's aunt was living in Aberdeen, Washington at this time. In September 1901, the family emigrated except for Nellie, age 10, and Marie, age 8, who had to stay behind until Clara's mother could earn enough money to send for them. They ended up staying in Norway until 1911. In Aberdeen, Clara's family stayed with her aunt for several months, and then Clara's mother married John Berg. John was from Hinnøya and had been living in both Aberdeen and Astoria, Oregon while he worked for a fish cannery. Clara was sent to live with Hilda, who had also recently married, and her mother and Olaf moved to Astoria. Karen and John had three children: Emil, Oscar, and Julius. Clara went through the eighth grade in six years, and after she finished, she went to Portland, Oregon and became employed by a paper box factory. However, the glue at the factory made her sick, and she returned to Astoria. By this time, Nellie and Marie were also in Astoria, but Nellie had contracted TB while in Norway and died within a year. The doctor thought Clara had TB also, but she just needed to recover from her exposure to the glue at the factory. When she was feeling better, she met a man she had attended Sunday school with. His sisters did office work in canneries, and Clara decided she wanted to go into this line of work as well. With financial help from her mother, she attended a business college. In 1919, Clara married Lyle Heintzelman and had a son, Lyle Heintzelman Jr., in 1920. The family lived in Hoquiam, WA for three years and then moved to Astoria. In 1938, Clara and Lyle divorced, and Clara moved to Aberdeen. She then worked for the State in Olympia for seven years. In 1942, she married Leroy Greene, but this marriage did not last either, and they divorced six years later. Clara returned to Norway in 1971 and 1976 and remains in contact with her relatives in Harstad, Norway. Having emigrated at such a young age, Clara does not know much about Norwegian traditions but can understand the language.