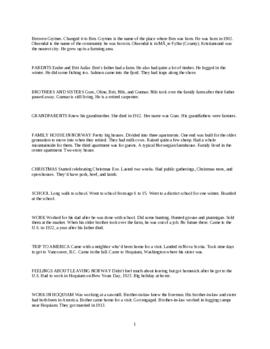 Ben Grytnes was born Bersven Grytnes on October 6, 1902 in Oksendal, Norway. His parents were Endre and Brit (Aafar) Grytnes, and he had four siblings: Nils, Gunnar, Brit, and Guro. Endre was a farmer and also owned a lot of timber, which allowed him to log during the winters. Ben attended school from age 6 to 15 and then began working for his father and hunting. He hunted for grouse and ptarmigan, which he sold in the market. Ben's father passed away in 1921, and a year later, Ben decided to immigrate to America. He traveled to Hoquiam, WA, where his sister and her family lived. Ben's sister had three children, who helped him learn the English language. Ben caught on quickly and had no difficulties getting accustomed to America. In Hoquiam, he began working at a sawmill, which lasted for two months, and joined the Sons of Norway. He then began logging, which provided him with the opportunity to make a better living. In 1926, Ben returned to Norway and stayed for one year before coming back to America. By that time, the Depression had begun, and the American government was only allowing a certain number of immigrants to come into America. Since he was not an American citizen yet, Ben spent the summer in Alberta, Canada and then logged and did carpentry work in Vancouver, British Columbia. When he finally went back to America, he began logging near Hoquiam again. In 1927, Ben married a woman named Mabel, whose parents were from the same part of Norway as Ben. Mabel and Ben had two daughters, Norma and Jean. In 1932, the logging camps around Hoquiam began closing, and Ben went to Ketchikan, Alaska, where he entered the fishing industry. After his second year there, he bought and rebuilt an old fishing boat and continued fishing until he retired. Ben has visited Norway once more since returning in 1926 and still remains in contact with his relatives there. Ben and Mabel never spoke Norwegian in their household, but according to Ben, Mabel 'cooks [Norwegian dishes] better than they do in the old country.'