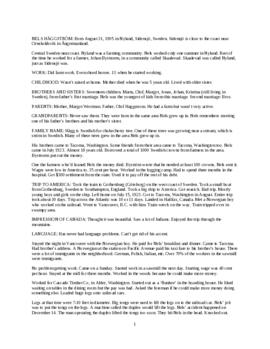 The interview was conducted with Nels Häggström on July 20, 1981 in Tacoma, Washington. This interview contains information on personal background, emigration, employment, and Swedish heritage.

Nels (Nils) Häggström was born on August 31, 1905 in Nyland, Sidensjö, Sweden. Nels had six brothers and sisters and lived with an older sister after their mother died when he was five years old. Three of Nels' brothers moved to the United States to find better jobs, and Nels decided to join them in 1923. He immediately found work in the lumber business. Unfortunately, it was a dangerous job, and Nels had a severe accident that left him unconscious for two days and in the hospital for three months. After the accident, Nels worked at Lyle Plywood in Tacoma. He attained his citizenship after five years. Nels married Violet Larson in 1933, and they had one child named Bernice. Nels can still speak Swedish and likes to preserve the traditions, but he does not want to return to Sweden. Nels was confirmed Lutheran and attends a Lutheran church with his family.