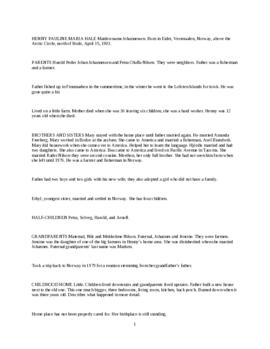 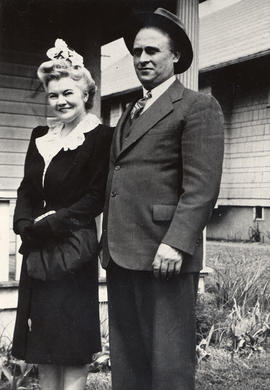 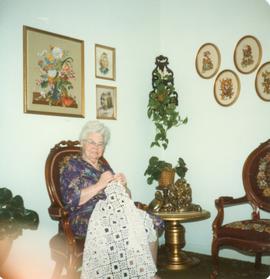 The interview was conducted with Henny Hale on February 17, 1982 in Tacoma, Washington. This interview provides information about life in Norway, church experiences, Norwegian Christmas traditions, oral tradition within the culture, dealing with Norwegian winters, reasons for coming to America, voyage to America and Tacoma, settling into a new country, life in Tacoma, marriage, trips to Norway and the changes there, maintaining Norwegian traditions, and pride in Norwegian heritage. The interview also contains an early photograph of Henny Hale and her husband Louis and two photographs of Henny at the time of the interview. The interview was conducted in English with some Norwegian at the end of the interview.

Henny Hale was born in Eidet, Vesteraalen, Norway on April 15, 1903. She was one of six children by Harold Johannessen and Petra Nilson. Her mother died when Henny was 12 years old, at age 36, which left Henny and her older sister Mary to do the work and raise the rest of the children. Her father remarried Amanda Freeberg, with whom he had two sons and two daughters. Henny was confirmed at age 15 and left home when she was 17, after which she did housework at a neighboring farm for two years. She then worked as an aid for her schoolteacher. Henny left for America on October 10, 1923, originally planning on staying only five years. After reaching Ellis Island, she took a five-day train ride from New York to Tacoma, WA where her uncle, George Johnson, and aunt met her. She did housework for Scott Henderson, a lawyer in Gravelly Lake, but soon found another job. She started going to Normanna Hall, where she met her husband Louis Hale, who was a gardener at the time, in 1926. She went to night school and lived in Seattle for a year but then moved back to Tacoma. She was married by Pastor Edwards (no date given) on 12th and 'I' Street. Louis worked at Atlas Foundry until he was sick, and then as a school janitor for a while. They had two children: Phyllis June, born on April 15, 1929, and Anita Larraine, born on February 3, 1934; both were born in Tacoma, WA. Phyllis married Herman McDowell and remarried Irvin Schmit, and works as a secretary for the County Commissioners. Anita has five children and lives in Oregon. Henny has ten grandchildren and fourteen great grandchildren. She took trips to Norway in 1977 and 1979, and had another planned for the summer of 1982. She has always been with the Mt. Zion Lutheran Church and used to be very actively involved with Scandinavian organizations, though not as much by 1982.