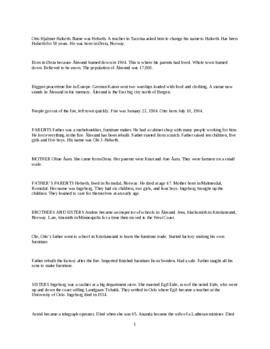 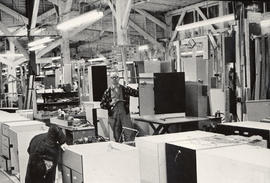 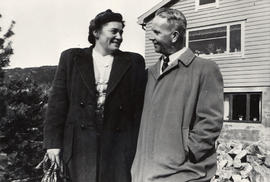 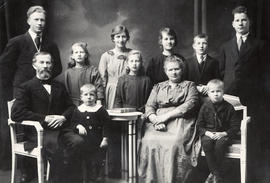 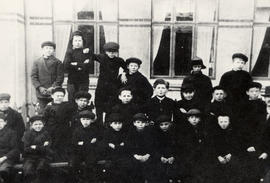 Otto Halseth was born on July 10, 1904 in Ørsta, Norway. He was one of ten siblings by Oline Åam and Ole J. Helseth, a furniture maker. He was confirmed at age 14 and a half, at which time he started working in an insurance company office. He left Norway on October 16, 1921 at the age of 17. His coming to America was an accident; he used a ticket that was supposed to be for his brother Knut, who was called in for military training before he could emigrate. Otto was met in Tacoma by his aunt and uncle, whom he lived with while attending night school to learn English and study for citizenship. He worked with his uncle in a Tacoma bakery during the first year, then as a car knocker for the railroad for some time. He got a job in a cabinet shop, Tacoma Millwork Supply Company, from 1924 to 1930, at which time the plant was shut down due to the Depression. He then left Tacoma and lived with another aunt and uncle on their fruit farm in Looking Glass Valley, ten miles outside of Roseburg, OR. In 1939, the factory in Tacoma reopened and Otto was called back to his old job as a cabinetmaker. He worked there one year until he was called into military duty on Pearl Harbor Day, December 7, 1941. He did his basic training in Fort Lewis, WA and additional training in Fresno, CA. He joined the Air Corp at Fort Lewis as a specialist in woodwork, working on gliders when they needed repairs. He was sent to Louisville, Kentucky and then to Lowrenberg Maxston Air Base in North Carolina. A law was passed in Washington D.C. that all past the age of 38 were needed more on the home front than on the war front; Otto's manager in Tacoma sent a note to Otto's commander saying that he was needed, and Otto went back to Tacoma where he worked on the construction of Fort Lewis. He went to Canada for three to four years (no date given) to do ministry work, mainly with Norwegians, speaking his mother tongue. Otto went to Norway after WWII, where he lived with his parents and did interpretations for English ministers who often went to Norway. He was asked to be pastor at a church there but refused. He stayed in Norway for three years, marrying Esther Swanlund Halseth, a nurse in his church, the last year before returning to the U.S. They had two daughters; Ruth was born in 1952 and Mary Ann in 1954. Both were delivered in the same room in Tacoma General Hospital. Otto did cabinetwork in the same Tacoma plant after returning from Norway and retired when he was 68 and a half, after which he did work for his church. He was not involved with Scandinavian organizations. He took a trip back to Norway with his wife in 1973. Otto's name was originally Helseth, but a Tacoma teacher asked him to change it to Halseth, which he has been for 50 years at the time of the interview.