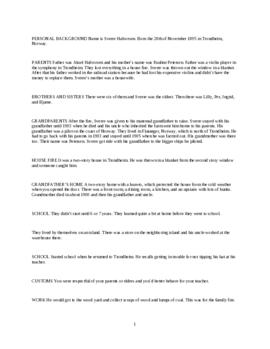 Sverre Halvorsen was born on November 28, 1895 in Trondheim, Norway. He was the oldest of six children by Aksel Halvorsen and Pauline Petersen. After Sverre's family lost everything in a fire, he was raised by his maternal grandfather until his death in 1903. The uncle who inherited the grandfather's estate sent Sverre back to his parents until 1905, when he was farmed out to a family in Bjørgan, close to where his grandfather had lived. He left his foster family when he was 15 and got a job on a lumber schooner that sailed lumber from Namsos to the northern coast of Norway and to Bodø and Tromsø. He left for America when he was 17, going through Hull and Liverpool, both in England. He traveled alone and reached Ellis Island on April 27, 1913 and Seattle on May 4, 1913. He fished with his uncle, Ed Kverne (?), as a deckhand that first summer, working in Seattle and up to Cape Flattery, WA and Neah Bay, WA. He was laid off in January 1914, got a room in the YMCA, and went to night school to learn English. He got another job as a deckhand on a fishing boat that went near Portlock, Alaska. He fished there until April 1916, when the second mate of the ship, who was raised in northern Norway, got a job as skipper on a whaling boat that went to Port Armstrong, Alaska. He returned to Seattle and went to Poulsbo, WA. He then walked to Winslow, WA and joined the Coast Guard, where he got to join as First Class because he had spent so much time on the water. He joined in 1916, but the U.S. entered WWI before his required year of service was over and he ended up serving in the war, even though he was not a citizen. He gained citizenship in 1919 and stayed in the Coast Guard until 1947. He officially met his wife at the Woodland Park Zoo in Seattle on April 4 and married on October 27 (no year or name given). They have two children, Norman and Marie, two grandchildren, and one great-grandchild. He settled on Bainbridge Island, WA after retiring, fished in Alaska for Libby McNeill Company, and moved to Gig Harbor, WA in 1975. He has been involved in different organizations-he was active in Sons of Norway while on Bainbridge Island, but inactively since moving to Gig Harbor, and actively in the Eastern Star and the Masonic Orders; his wife has been active in the Presbyterian church. He visited Norway in 1975. People had a hard time saying the name Sverre, so many called him Hal.