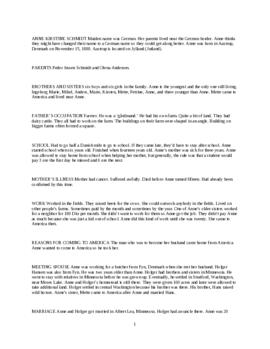 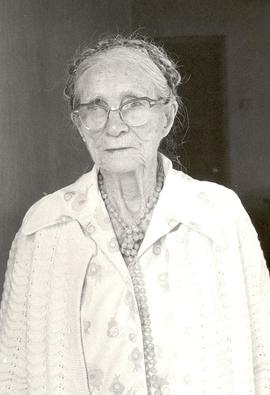 Box 11, File 8B Photographs
One photograph

Anne Hansen was born on November 15, 1888 in Aastrup, Denmark, which is located on Jylland (Jutland). Anne's parents were Peder Jessen Schmidt and Olena Andersen, and Anne was one of twelve children. Peder was a farmer, and all of the children had to work on the farm. Anne's mother died of cancer when Anne was fifteen, and Anne then began living on other people's farms.

While working for a butcher from Fyn, Denmark, Anne met her husband, Holger Hansen. Holger had been living with relatives in Minnesota, and when he came to visit from America, Anne wanted to go back with him. Anne was twenty years old at the time, and they were married in Albert Lea, Minnesota. They then went to Stratford, Washington, near Moses Lake, and got a homestead from somebody who had to give it up to the government. The homestead was a wheat farm, and they also raised potatoes and onions for their own use. Holger worked in the harvest fields, and in the winter, he trapped coyote and sold the fur. Anne and Holger had three children: Henry (Hank), Charlie, and Linda.

Anne and Holger spoke Danish in their home, so all of the children can understand the language. Holger passed away in 1968, and Anne continued to live on the homestead for as long as she could. Charlie then took over the farm, raising cattle and sweet corn. Anne is proud of her Danish heritage, but she also feels she is a 'true American.'