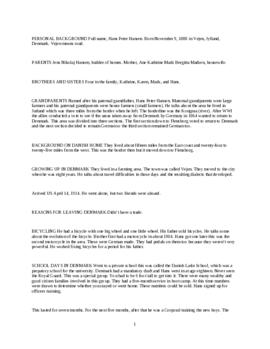 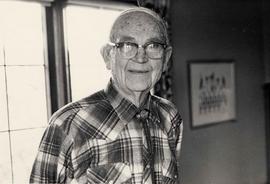 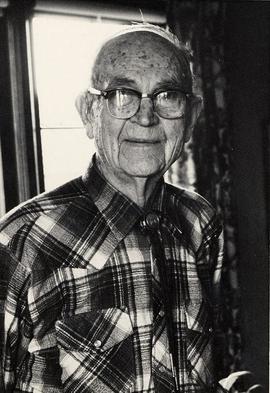 Box 2, File 15B Photographs and Clippings
Two photographs
One clipping

Hans Peter Hansen was born on November 9, 1888 in Vejen, Denmark to Jens Nikolaj Hansen and Ane Kathrine Bergitte Madsen. Hans had three older siblings: Kathrine, Karen, and Mads. The family moved to the city when Hans was eight years old, and his father had a bicycle shop there. Hans attended a private school called the Danish Latin School, and when he was eighteen, he went into the Danish Royal Guard. Hans signed up for officers' camp and then became a Corporal, training the new boys.

During his time in the Royal Guard, Hans got to know Crown Prince Christian, who later became King Christian X, Prince Gustav, and a Danish count. When he was twenty-five years old, he decided to immigrate to America because he had no trade in Denmark. Hans settled in Tacoma, WA, where a friend of his father's lived. Hans took night school at Franklin High School to improve his English, and in November 1915, he and a friend, John Hansen, opened an auto-repair shop, H.P. Hansen & Co. At first, Hans only worked on Model T Fords but later expanded and began working on Model A's as well.

Hans met his wife, Clara, at the Danish Young People's Society, and was married in 1916. They had two children, Bergitte and Margaret. In Tacoma, Hans has been involved with church, Commercial Club, Danish Society, and the Leif Erikson League. In 1980, the Leif Erikson League honored Hans as the oldest Danish immigrant on Danish Day during Scandinavian Days in Tacoma. Another special occasion for Hans occurred on the 250th anniversary of the Royal Guard in the U.S. At that time, Hans received a special invitation from the Danish consulate to be his guest and have an audience with the Queen of Denmark. Hans' heritage has been very important to him, and he continues to keep in touch with all of his relatives there.