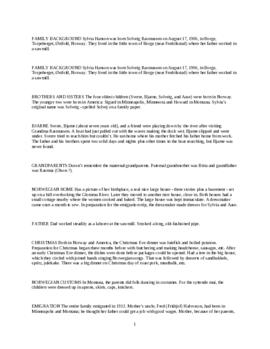 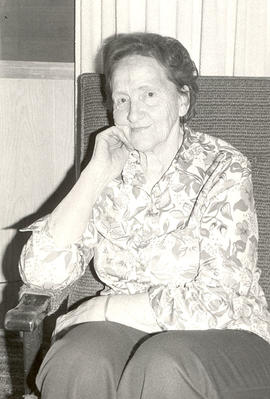 The interview was conducted with Sylvia Hanson in Moses Lake, Washington on June 15, 1983. This interview provides information on family history, the accidental drowning of a younger brother, Christmas traditions in Norway and the U.S., maintenance of Norwegian customs, voyage to America, school in Minneapolis, farming in Montana, marriage and family, citizenship, experience with gypsies in Montana, visit to Norway, community involvement, Norwegian heritage. The interview was conducted in English.

Sylvia Hanson was born Solveig Rasmussen on August 17, 1906 in Borge, Torpeberget, Østfold, Norway. She was one of 6 children by Ole Anton and Nora Josefine (Halvorson) Rasmussen. Before coming to America, her family lived in Borge, near Fredrikstad, where her father worked in a sawmill. The entire family emigrated in August 1913 and traveled through Oslo and Liverpool, England before reaching Quebec, Canada; they then took a train through Michigan to Minneapolis, Minnesota. No one in the family spoke English, and Sylvia started school in Minneapolis. The family then lived on several farms in the northeast corner of Montana, moving as the family grew. In the fall, Sylvia went with her mother to the threshing crews, where she translated and her mother cooked. In addition, Sylvia helped out on the farm, missing school to do so at times. Her father obtained citizenship for the entire family in Plentywood, Montana, the county seat of Sheridan, when she was about 13 years old. When she was 14, she helped an aunt with the housework and children, and went to another farm to help the family there. She was confirmed and married at the parsonage in Scobey, which was about 8-10 miles away from the third farm the family lived on in Montana. Her husband, Clarence Hanson, was originally from Minnesota, but his parents lived in Scobey; he was of Norwegian descent and could speak the language, though he didn't like to. He was a hired man at the Peterson place where Sylvia was the hired girl when she was 17, and they were married on February 21, 1928; after her marriage, she did not work outside the home. They lived and farmed shares on the uncle's farm and one daughter, Cora, was born there. They moved to different farms, primarily in Montana, and moved to work on the Fort Peck dam in the 1930's; Clarence worked for the J.A. Torling (?) Construction Company there, first as a laborer and then as a mechanic-welder. In 1941, he was transferred to Hermiston, Oregon, where he continued to work in construction. He died of a heart attack on March 24, 1957 in Moses Lake, Washington. After her father died and her mother had a stroke, Sylvia brought her to Moses Lake and cared for her from 1959-61, when she died at the age of 84. All of her children-Doris Evelyn, Cora Vivian, Mildred Sylvina, and Clarence Leonard-were born in Montana, and she has 12 grandchildren and 14 or 15 great-grandchildren. She took a trip to Norway with Astrid Rasmussen Peterson, her father's niece, on June 27, 1969, and visited cousins there. She has been active in several community groups-a member of Sons of Norway for 15 years; doing circle and general work in her church; and distributing food and clothing two days a week with a local community service group. In addition, she helps teach a class in Norwegian at her church one night a week during the school year.