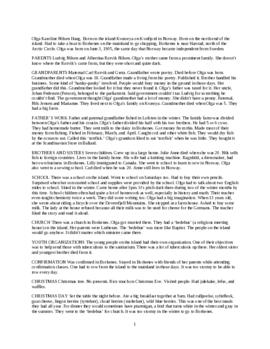 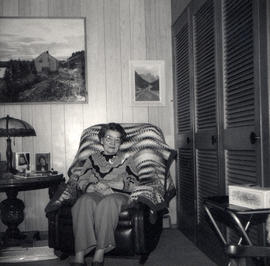 The interview was conducted with Olga Haug on October 25, 1982 in Seattle, Washington. This interview contains information on family history; life on a Norwegian farm; fishing, school, and church life in Norway; Christmas traditions; work in Norway; marriage and family; trip to and arrival in America; life in the U.S.; trips to Norway; community involvement. Also available are two black and white photographs of Olga Haug at the time of the interview.

Olga Karoline (Nilsen) Haug was born on June 3, 1905 on the island of Kvæøeya on Kvaefjord in Norway. She was one of seven children by Ludvig Nilsen and Albertina Roervik; her oldest sister and youngest brother died of tuberculosis. Her family lived on a farm that was divided between her father, his two brothers, and his cousin; she attended school on the island as well. She was confirmed at the church in Borkenes on the mainland and stayed with friends of her parents while attending confirmation classes. She went to sewing school for three months and worked with her sister in her dressmaking shop. When Olga was 17, she worked for a dentist in Harstad for a year and cooked for fourteen people. She sewed after she went home and raked hay in the summertime for the farmers. Olga met her husband, Magnus Haug, at a Christmas party at the bedehus, a religious meeting house, on the island in 1925 when she was 20 and he was 31. He had lived in the U.S. for twelve years but had come home to Kvæøya to visit for a year. They were married in the Borkenes Church on July 6, 1926 and went to Harstad on their honeymoon. They came to the U.S. in September 1926, and stayed with Magnus' three cousins in Wisconsin for a week. They then rode the train on to Oregon, where they lived in Astoria with Magnus's aunt; Magnus had a fishing boat there and Olga helped out in the house. They moved to Seattle in the spring, where she lived with the aunt's sister in Redmond, WA while Magnus fished. They rented a place in Kirkland, WA for two years and had one son, Melvin, who was born in 1929. He is a retired art teacher, and is married and has a family. Magnus had served in the Coast Guard before his 1925 visit to Norway, and he rejoined after he returned to the U.S. and his fishing vessel was run down and sunk by a government boat. He guarded the California coast during WWII and retired from the Coast Guard after twenty-five years of service; he died of a stroke in 1967, fifteen years after he retired. In 1937, Olga had started making lefse for Sund's Norway Pacific Importing Co., and after Magnus died, she cleaned houses and made lefse. She has taken three trips to Norway. The first was in 1952, when she went with a friend and stayed for five months; her son was attending the University of Oslo's summer program at the same time. In 1971, she took her granddaughter and Clara Greene, Magnus' cousin, for six weeks, and in 1977, she went with a niece from Canada whose daughter worked in Borkenes. Olga belongs to the Sons and Daughters of Norway and Nordlandslaget, and attended a Lutheran church until she quit. Her grandson fishes with his father and does carpentry work; her granddaughter is a nurse, and is married and has a family.