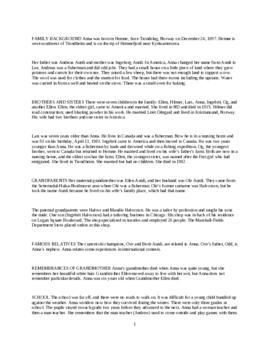 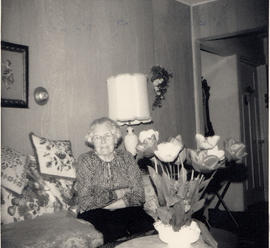 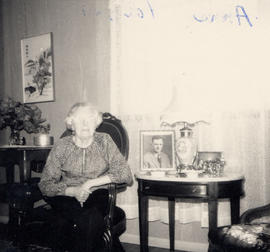 The interview was conducted with Anna Haugen on April 4, 1983 in Seattle, Washington. This interview contains information on life in Norway, family background, famous relatives, school and church life in Norway, Christmas traditions, work in Norway, WWI in Trondheim, preparation for emigration, voyage to America, life in North Dakota, learning English, voyage to Tacoma, work in Tacoma and Seattle, reasons for marrying late, and return trips to Norway. Also available are two photographs of Anna Haugen at the time of the interview. The interview was conducted in English

Anna (Aunli) Haugen was born on December 24, 1897 in Hemne, Sør-Trøndelag, Norway, and was one of seven children by Ingeborg and Andreas Halvorson Aunli; her father, Andreas, was a fisherman and did odd jobs. She went to school, and attended church in Kyrksaeteroera, which was a forty-five minute walk away, where she was confirmed at age 14. After confirmation, she worked for two years as a housekeeper for a minister in Trondheim, and after she finished school, she worked on an estate haying. In March 1915, her older sister, Ellen, who was married and lived in North Dakota, sent Anna a ticket to come to the U.S. At that time, Anna was milking cows on a different farm in Selva, Norway, and she went home to Hemne and stayed with her family for a month before leaving. She went through Liverpool, England, and the ship had to travel a different route because of the threat from German war planes and submarines, a redirection that made the trip last two weeks instead of one. The ship landed in Montreal, Canada, and she took a train to Chicago and the Milwaukee Road line to North Dakota. She got a job in a restaurant owned by a Danish woman, Mrs. Evans, starting as a dishwasher and then advancing to cook status. When Anna had been in the U.S. for six months and was living in Bowman, ND, Ellen died; because she was only 17, Anna then needed a guardian. Her brother-in-law did not want the responsibility, so Markland, a Swedish hardware store owner from Scranton, ND, took over her guardianship. Anna moved to Tacoma on July 4, 1916 after the Sagens, neighbors from Norway, heard of Ellen's death and invited Anna to live with them. She was first employed in Tacoma by an English lady with two children, but she soon quit this job because she could not burn a light in her room. Her second position was with the Dempseys, a prominent lumber family in Tacoma, where she took care of the two children for two and a half years. After this, she cooked at Camp Daniher (?), a lumber camp in Darrington, WA that was named after Mr. Dempsey's father, until WWI was over in 1918 [sic]. She later worked at Camp #3 in Clear Lake until the lumber camps closed in 1921. She then got a job at City Dry Cleaners in Seattle, where she worked for 22 years. Before she took her first trip to Norway in 1930, the owner of the dry cleaners died, and the shop changed hands and was renamed Troy Cleaners. Anna worked at Troy for five months and then transferred to I. Magnin where she worked in alterations for two years; she then returned to Troy Cleaners. She first met her husband, John Haugen, at a Christmas party at her rented house on Minor Street in Seattle. John came to America in 1924 and worked in the woods at first; he later worked at Puget Sound Window Cleaners. They married in 1942 after knowing each other for twenty years [sic], and had no children. Anna revisited Norway in 1965, traveling alone because John was feeling too ill to go; he died of a heart attack while she was in Hemne, and it took fourteen days before she could get a plane back to the U.S. She has been a life member of the Sons of Norway but does not participate in the activities. She also states she is an 'old-fashioned Lutheran,' though she seldom attends church.