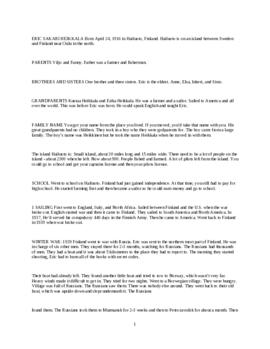 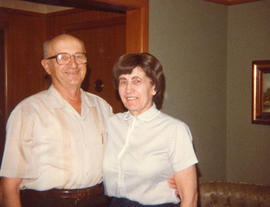 This interview was conducted with Eric Heikkala on August 27, 1981 in Vancouver, Washington. It contains information on family background, being a prisoner of war, coming to America, marriage and family, and Finnish heritage. The interview also includes a photograph of Eric at the time of the interview.

Box 4, File 5B Photographs
One photograph

Eric Heikkala was born on April 24, 1916 in Hailuoto, Finland, which is located on an island between Sweden and Finland near Oulu in the north. His parents were Viljo Heikkala and Fanny Sipila, and Eric was the eldest of five children. After grammar school, Eric began farming and then became a sailor so he could earn enough money to go to school and obtain his captain's and pilot's licenses. Eric sailed to England, Italy, North Africa, and the United States.

In 1939, Finland went to war with Russia, and Eric was sent to northern Finland, where he was in charge of six other men. When the shooting started, they rowed to Norway, but the Norwegian village they arrived at was full of Russians. The Russians found them, and Eric became a prisoner of war for four months and twenty days. By the time he was released, Eric was so weak that he had to be carried back to Finland. He remained in the hospital for awhile and then started working on ships again.

When Pearl Harbor was attacked, the United States bought the ship Eric was working on, and he was told to go to America and find work. Eric stayed with an uncle in New York for several months, during which time he met his future wife, Ida Pitkanen, in Manhattan. Ida was originally from Muuruvesi, Finland.

After his stay in New York, Eric then went to Vancouver, Washington and began doing carpentry work. Once he was settled, he sent for Ida and got married. They had two sons, Wayne and Roy. Both of the boys understand Finnish, and Eric is very proud of his heritage. He has belonged to the Finnish Brotherhood and has made several trips back to Finland.