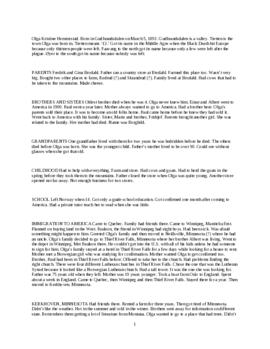 The interview was conducted with Olga Hemmestad on July 26, 1983 in Bellingham, Washington. This interview contains information on family history, childhood in Norway, school, voyage to Canada, arrival in Canada and the U.S., confirmation, arrival in Washington State, settling in Ferndale, learning English, marriage, trip to Norway, changes in Norway, family in America, citizenship, moving back to Ferndale, family and friends in Norway, childhood memories, Christmas traditions, and canning. The interview was conducted in English.

Olga Kristine (Brodahl) Hemmestad was born in Tretten, Gudbrandsdalen, Norway on March 5, 1893. She was the youngest of seven children by Frederik and Gina Brodahl, and she had a younger foster sister who was a second cousin. Her father ran a country store until Olga was little and had three small farms. She had a private tutor to teach her to read when she was young, but only completed her grade school education before the family emigrated. They left Norway on May 18, 1907, traveled through England, and arrived in Quebec, Canada. They visited a family friend who lived in Winnipeg, Manitoba, Canada, but decided to move to Thief River Falls, Minnesota, where Olga's brother Albert was living. She was confirmed in a Thief River Falls church one month after arriving in the U.S., and the family moved to Kerkhoven, Minnesota after living in Thief River for a year. They rented a farm in Kerkhoven for three years, but grew tired of the weather and moved to Washington State. They visited friends in Everett, WA and Parkland, WA, where she saw Pacific Lutheran Academy, and settled in Ferndale, WA. Her father died in 1912, and in 1918, her mother sold the farm and moved to Bellingham, WA, where Olga obtained her citizenship. Olga met her husband, Ole Hemmestad, in Bellingham, and they were married in 1920. The sale of the Ferndale farm fell though and her mother got it back; Olga moved there to take care of her while Ole fished in Alaska in the summer. Olga and Ole took a trip to Norway in 1960, and he died in 1964. She stayed in Ferndale almost a year after his death, then sold the farm and moved back to Bellingham. She attends Central Lutheran Church.