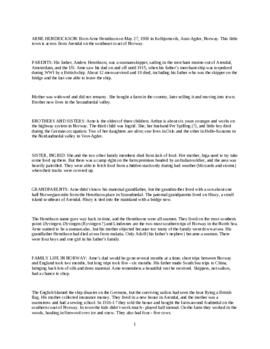 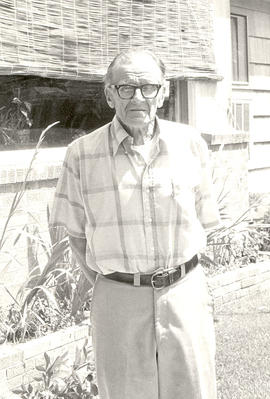 The interview was conducted with Arne Hendrickson on June 15, 1983 in Kennewick, Washington. This interview contains information on family history; family life in Norway; father's death in WWI; school, confirmation, and work in Norway; emigration and work in the U.S.; logging and trapping in California; WWII; citizenship; Scandinavian organizations; trips to Norway; children; Norwegian language. Also available is a photograph of Arne Hendrickson. The interview was conducted in English.

Biographical Information Arne Hendrickson was born Arne Henrikson on May 27, 1908 in Kolbjørnsvik, Aust-Agder, Norway, the oldest of three children. His father, Anders Henrikson, was a seaman-skipper in the merchant marine, and died when a British ship torpedoed his ship during WWI. His mother, Inga Henrikson, never remarried, and was a seamstress while they lived in a house in Arendal; she collected the insurance money from his father's death and also had a sewing school. Around 1916-17, she sold the house and bought a farm near Audnedal. Arne walked to school five to six miles away until he was 14, and then attended confirmation class once a week all summer long at the Vigeland parish. He attended a special school in Buhølen to learn woodworking for about a year and a half, and then got a job in a carpenter's shop-but the shop was small and work was unsteady. He went to sea as a merchant marine for two to three years, working out of Amsterdam and Hull, England, and immigrated to the U.S. with a few neighbor girls in 1927. He arrived in New York on September 22, 1927 and stayed with friends on Staten Island until he got a construction job building bungalows and houses. When he finished that job, he worked on a mud dredge deepening the harbor between the Statue of Liberty and New Jersey, and then with an Italian outfit in Yonkers, NY. He left New York with his friend Martin on March 12, 1930 and arrived in Eureka, CA, where an uncle lived. He worked in several different logging camps in California for two years, but left after he witnessed another man get crushed by logging equipment. There was no logging in the winters, so he spent one and a half winters living and trapping raccoon, mink, and otter on Pete Thompson's homestead in the Humboldt Mountains, about forty miles east of Eureka. He moved to Billings, MT, after two years, and between 1932-34 had a series of jobs in various places: building sheep sheds in Lovell, WY; construction in Bismarck, ND; and forest service in Montana. He met his wife, Iva Marie Brown, a native of Montana, and they were married on September 19, 1934. Their first home was in Milltown, MT, east of Missoula, and Arne worked in a sawmill for Anaconda Copper. They had three children-Julie, Dane, and Doug-and stayed in Milltown for seven years, until WWII started. To avoid Arne being drafted, they left the area in about 1941 and for the next nine months, he worked on the construction of a Navy boot camp in Farragut, ID. They left in December, and he had construction work in California until the family moved to Washington in 1943, after which he got a job with Morris and Knutsen Construction in Kennewick. He became a citizen in 1943, and his name was legally changed to Hendrickson. He worked for independent contractors around Kennewick until the late 1940s when the union went on strike and there were no jobs. He then went to Alaska where he built radar stations and apartment houses, and he owned his own business in Kennewick after he moved back. He and Marie fished commercially out of Ilwaco, WA after he retired, but quit in 1979. Arne organized the Sons of Norway lodge in Kennewick, and it held its first meeting on April 6, 1968; he also belongs to the Eagles, Moose, 1949 Union in Pasco, and the Masons. He has taken return trips to Norway in 1958, 1969, and 1968.