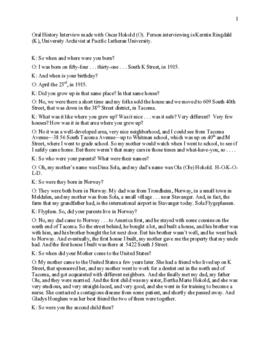 This interview by Kerstin Ringdahl with Oscar Hokold on December 16, 2011 in Tacoma, Washington.

Oscar T. Hokold was born to a Norwegian immigrant couple on April 23, 1915, in Tacoma Washington. Oscar led a long and distinguished career in Tacoma, developing and constructing houses, condominiums and over 2,000 apartments. He also owned and operated King Oscar Motels and a restaurant, Oscars on Hosmer, where he spent time daily eating meals and visiting with his customers.

Oscar began his career in the lumber industry at age 16 while still in school. He attended college at Pacific Lutheran University and also the University of Washington. He spent time commercial fishing in Alaska and when he returned, worked at Todd Pacific Shipyard where he soon became superintendent of the pipe installation for a fleet of eight carriers.

In the late 1940's Oscar bought a lot at the corner of Sheridan and 52nd street and built a two bedroom house that he later sold. He used that money to buy more lots and build more houses and from then on he never stopped building. He was known for making deals and his old-fashioned do it yourself attitude. He said "I'll die with a hammer in my hand."

He passed away peacefully on June 5, 2013 at the age of 98. Oscar is survived by his daughter, Jean Patterson and son, Harry Hokold. He was preceded in death by his wife of 71 years, Olivann, and his son, Jack Hokold.