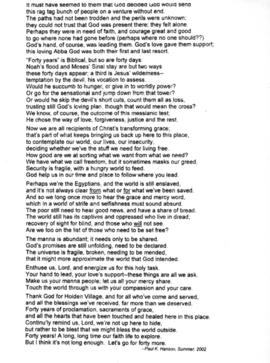 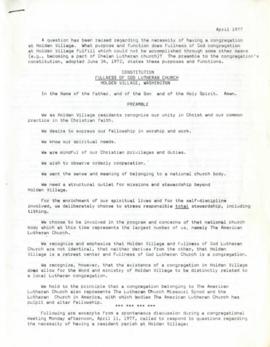 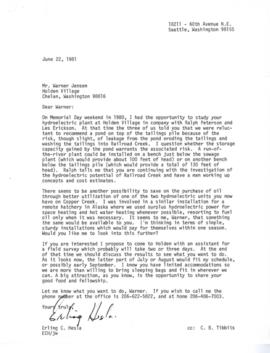 In 1896, James Henry Holden made his first claim on the area which would later become Holden Village. However, due to the expense and difficulty involved in transporting copper from the isolated mine, the operation did not begin its full productivity until 1937. By 1938 the mine had become successful and processed 2,000 pounds of copper ore daily.

The Howe Sound Company built a town site on the north side of Railroad Creek soon after the mine began to thrive. The town site consisted of a number of dormitories, a gymnasium, bowling alley, mess hall, school, and hospital, among other things. West of the town site was a patch of small houses intended for miners and their families. The Holden Mine and its town site flourished for many years despite the isolation. However, after World War II the price of metal fell and the resources of the mine began to diminish. The mine was closed in 1957.

With the closing of the mine in 1957, the Howe Sound Company sought a buyer for the Holden Mine and town site. With an asking price of $100,000, the remote piece of property did not sell. However, Wes Prieb, a man active in the Lutheran Bible Institute of Seattle, saw the potential for a spiritual retreat center at the old mine. Originally he asked the Howe Sound Company to give the land to the Lutheran Church as a gift. The Company refused, but eventually agreed to sell the mine, town site, and all the land for one dollar.

With the purchase of the land came a multitude of problems for the Lutheran Bible Institute. The structures were old and decrepit. Many were on the brink of collapse and those that still stood did not meet current building codes. With the help of large brigades of volunteers, the Lutheran Bible Institute successfully cleaned and refurbished many of the buildings. The Village began to function as a summer retreat center soon afterward. Originally, the Lutheran Bible Institute imagined a summer-only center, and kept limited staff on-hand for the first few winters. However, both the infrastructure needs of the community and the natural beauty of Holden Village in the winter led to the creation of a year-round retreat center.

Today, Holden Village operates as a year-round retreat center and is one of the most remote continuously inhabited places in the contiguous United States. Largely run by volunteers, the Village offers educational programming and outdoor recreation opportunities to visitors from all over the world.

The Holden Village Records include information related to the founding of the Village, programming, projects, volunteers and staff, and the Cascade Mountain/Lake Chelan area of Washington. Limited documentation on the Howe Sound Mining Company and the Holden Village Mine are also available. Records include publications, sermons, writings about the Village, faculty and staff lists, blue prints and plans, maps, correspondence, committee materials, photographs, and audiovisual recordings.

Organized by topical series. Series are organized chronologically or alphabetically depending on material type and existing order at time of arrangement.