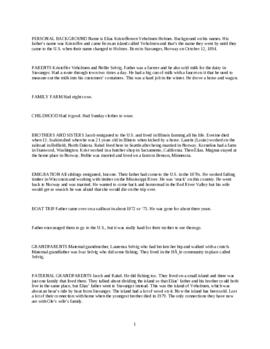 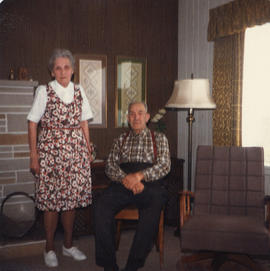 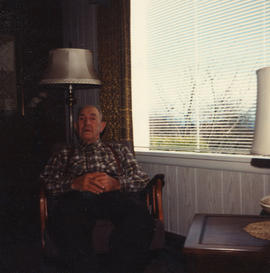 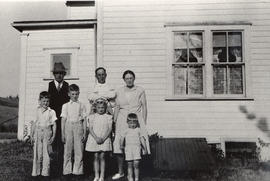 The interview was conducted with Elias Holmes on March 18, 1982 in Stanwood, Washington. This interview contains information on family history, emigration, life and work in Norway, Norwegian Christmas traditions, voyage to the U.S., reasons for and feelings about emigrating, work in the railroad, learning English, railroad unions, visits to Norway, life in North Dakota and the West Coast, children, dairy farming, citizenship, church, schools, changes in Norway, use of Norwegian language, comparison of work and wages between the past and now. The interview also provides a photograph of Elias and his family in Stanwood, WA (1940) and photographs of Elias and his wife Gudrun at the time of the interview. The interview was conducted in English. Also see Gudrun Holmes, T153.

Elias Kristoffersen Holmes was born on October 12, 1894 in Stavanger, Høle, Norway, one of eleven children by Nellie Selvig and Kristoffer Veholmen; his father was a farmer and sold milk to the Stavanger dairy. Elias went to school for seven years and was baptized, confirmed, and married in Dome Church in Stavanger. He worked on the farm until confirmation, then at a potato mill in Stavanger when he was 16. His father had come and worked in the U.S. in the 1870s but went back to Norway to marry, and he encouraged his children to emigrate. All of Elias' siblings moved to the U.S. except for one, and Elias left for America on March 14, 1914 when he was 19, meeting his brother Louie in Belfield, ND. Elias reached Belfield at 2:00 am, and had to be at work for the railroad at 7:00 that morning; he continued to work for the railroad for twenty years. He visited Norway in 1927, where he met his wife Gudrun Hauge, who was his sister-in-law's sister. He later went back to Norway to marry her. They settled in North Dakota, but disliked the weather; working for the railroad required them to move often, but they moved permanently to the West Coast in 1937. He has four children: Kjell, born on April 1, 1931 in Billings, MT; John on October 4, 1932 in Bismarck, ND; Gudveig on May 25, 1935 in Glendive, MT; and Leif on September 9, 1937 in Mt. Vernon, WA. Elias gained citizenship in about 1935 when they lived in Stipek, MT, and he became a dairy farmer when the family moved to Washington. He quit selling milk when he was 71 and now rents out the farmland. His last name changed from Veholmen to Holmes when he came to the U.S., and he has not been back to Norway since 1930; he has not belonged to any Norwegian organizations either.