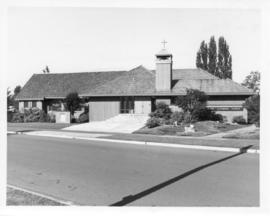 This folder contains a booklet from the dedication, a congregational historical record, and a brief history of the church.

Two men from Iowa, George Bruhn and Johan Johansen, were the founders of the Danish Lutheran church in this community in the early 1890s. The congregation was organized by 24 men in 1894. Rev. Jens J. Mylund was the first full-time pastor, arriving in 1896. TIn 1956 the congregation sold its facilities to another church in April. Property was purchased on Garfield Street and groundbreaking was held on August 18, 1956, with the first service held in the new building the following March. Remodeling and enlarging of the church began in October of 1976 after a successful fundraising program. The new addition was dedicated on April 3, 1977. A 1979 renovation included redesign of the large altar window which frames Mt. Rainier.