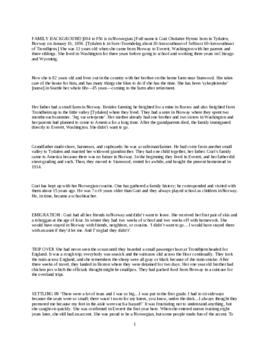 This interview was conducted with Guri Hytmo on April 6, 1978 in Stanwood, Washington. It contains information on Guri's family history, nursing, life in Norway, emigration, school, work, and Norwegian heritage. The initial portion of this interview is in Norwegian.

Guri Olsdatter Hytmo was born on January 26, 1896 in Tydalen, Soer-Troendelag, Norway. She emigrated with her parents and three younger siblings when she was thirteen years old, and they lived in Everett, Washington before moving to Stanwood, Washington, where her parents bought the present homestead in 1914. Guri was confirmed in Everett the first year in the U.S. and lived in Washington for three years before going to school and working three years in Chicago and Wyoming.

Guri received her citizenship papers in Mount Vernon, Washington when she was about twenty-one years old and started nursing at Swedish Hospital in Seattle in 1918. She progressed from head nurse to supervisor to assistant director, and worked at Swedish for more than forty years. She didn't receive her high school diploma until she retired from nursing, finishing her degree at Skagit Valley College. She now lives with her brother on the family farm near Stanwood and visited Norway for a month in 1972.