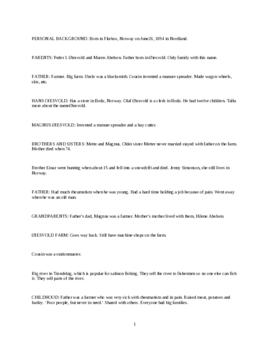 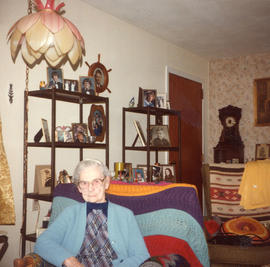 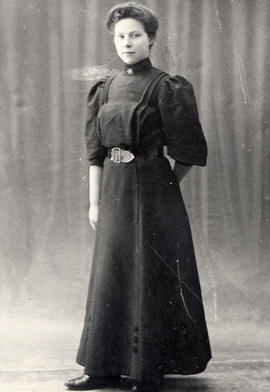 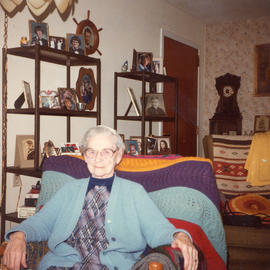 The interview was conducted with Hanna Jacobsen on October 20, 1981 in Tacoma, Washington. This interview contains information on family history, childhood, life in Norway, school, medical care, work in Norway, tailoring, work in Oslo, Christmas traditions, folk stories, voyage to America, Ellis Island, first impressions of U.S., work, learning English, marriage and family, church, trip to Norway, importance of Norwegian heritage, and changes in church. Also available are a photograph of Hanna Jacobsen (ca. 1910) and two photographs of her at the time of the interview. The interview was conducted in English.

Biographical Information Hanna Jensine (Øiesvold) Jacobsen was born on June 26, 1894 in Flœkos, Nordfold, Norway. Her mother was Maren Abelsen and her father, Peder Øiesvold, was a farmer; Hanna had four brothers and sisters. She started school at age 6 and went until she was 14 or 15. Her first job was working for an aunt for six months; she also worked on the family farm and then for an uncle who had twelve children. She learned tailoring in Sulitjelma, a mining town near the Swedish border, and later went to Oslo to look for work. She did housework and was a cook's helper in Oslo, and emigrated from there when she was 30 years old on January 23, 1925. It took eight days by train to get from New York to Seattle, and a cousin, Mrs. Strumsness, met Hanna at the railroad station in South Bend, WA. Hanna worked at a box factory in South Bend and then went to live with relatives, the Pedersons, in Tacoma, where she got a job as a coat girl at Lou Johnson's. Her husband, Maren Jacobsen, was born in Kvarvik, Norway and lived with relatives across the street from the Pedersons; he worked in landscaping. They were married at a pastor's house and had three sons. Harold was born on September 6, 1927 and works at a gold mint in Virginia; Robert was born on November 6, 1928 but died at the age of 3 from influenza pneumonia; and the third son, also named Robert, was born on January 22, 1933 and is a carpenter. Hanna stayed home with the children as much as possible but worked periodically at Lou Johnson's during the Depression, and Maren worked at the shipyards during WWII. Maren died when he was 46 or 47, and Hanna then did tailoring for Robert Holler (?) until they closed in 1958. She worked part-time at the Bon Marche in the mall and quit working when she was 82, after which she worked off and on at Klopfenstein's until June 1981. She is active in the Pentecostal church and visited Norway for the winter with her husband in 1947.