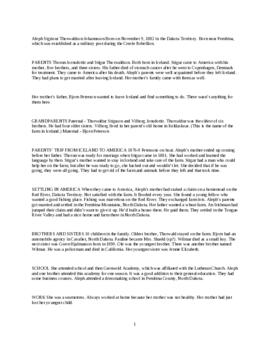 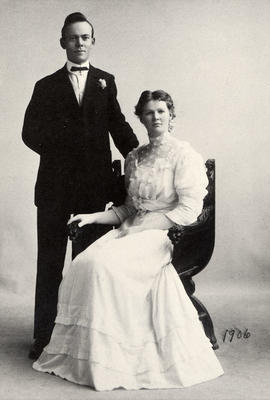 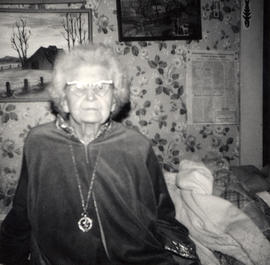 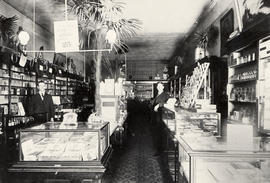 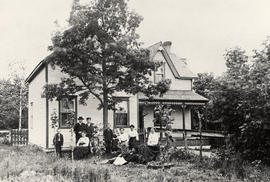 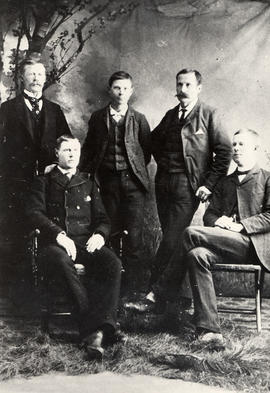 This interview was conducted with Aleph Johannsson on October 12, 1982 in Seattle, Washington. It contains information on family background, growing up in North Dakota, marriage and family, settling in Seattle, community activities, and Icelandic heritage. The interview also includes a photograph of Aleph's brothers (taken in 1893), a photograph of Aleph on her wedding day, a photograph of Cascade Drug Store, an article, which includes a picture of Aleph meeting President Vigdis Finnbogadottur (September 1982), and two photographs of Aleph at the time of the interview.

Aleph Johannsson was born on November 9, 1882 in the Milton, North Dakota, near Pemblina. Her parents, Stigur Thorwaldson and Thorun Jornsdottir, were from Gislatordum, Iceland and Fljotsdalheradi, Iceland, respectively. They had met each other in Iceland and were married after they immigrated. Stigur and Thorun settled in the Tongue River Valley in North Dakota and had ten children, of which Aleph was the eldest. After Aleph finished grammar school and one term at Grenwold Academy, which was affiliated with the Lutheran Church, Aleph attended a dressmaking school. She worked as a seamstress out of her family home. Aleph's husband, Bjarni Johannsson, was from Framnesi, Iceland and had settled in the same area with his family. He attended the University of Washington in Seattle, WA to become a pharmacist and corresponded with Aleph while he was gone. Aleph wanted to go to nursing school and did not want a serious relationship, but after Bjarni graduated, he proposed to Aleph. Neither Bjarni nor Aleph's father wanted her to become a nurse, so Aleph married Bjarni in 1906. They moved back to Seattle and had five children: Sigrid, Thorun, Wilma, Alice, and Lincoln. In 1912, they built the house that Aleph still lived in at the time of this interview, and Bjarni also owned Cascade Drug Company until 1946. Through the years, Aleph has been active in the Lutheran Church, has sung in the Icelandic choir, and helped organize the Anning Society, a charity society that helps those sick or in financial trouble. She has also met Vigdis Finnbogadottur, the President of Iceland. President Finnbogadottur told Aleph that she spoke Icelandic as if she had been born there and send her a telegram on her 100th birthday.