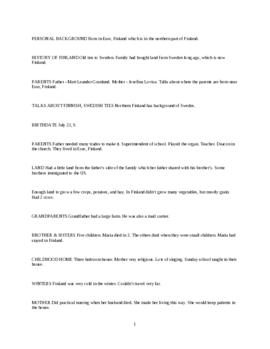 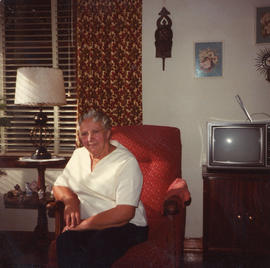 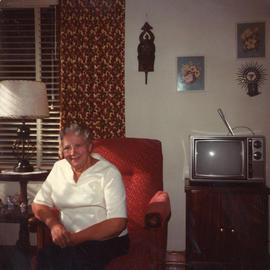 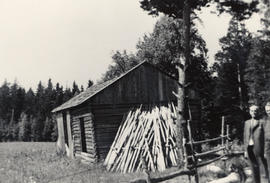 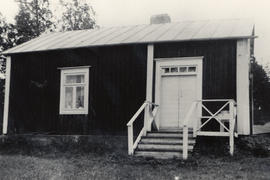 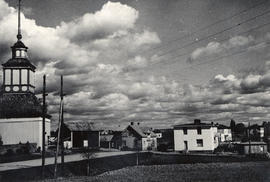 Anna Johnson was born on July 23, 1899 in Esse, Finland to Matt Leander Granlund and Josefina Lovisa. Her father was employed in a variety of trades, and the family owned a small amount of land on which they grew crops such as potatoes and hay. There were five children in the family, and all but Anna and her sister Maria died in their youth. Anna's father also died of a ruptured appendix at age thirty-one, after which her mother did practical nursing as a means of support until she too passed away when Anna was only nine. After her mother's death, Anna went to live with her uncle, where she helped take care of his children. She did not attend much school but learned to read and write as well as Bible history at home. When Anna was thirteen, her father's cousin visited Finland from America and invited Anna to return with him. Anna was happy to go with him and set sail from Hangö, Finland on November 24, 1913. After changing boats in Liverpool, England, Anna made a nine-day voyage across the Atlantic, landing at Ellis Island, where her name was changed from Granlund to Lund. From New York, Anna traveled to Bemidji, Minnesota, where one of her uncles lived with his family. Anna stayed with her uncle off and on until 1915, during which time she helped take care of his children, worked on a farm, and attended some school. The language barrier was difficult for Anna at first, but she felt that there were many opportunities to be had in America and worked to overcome it. After living with her uncle, Anna worked at a boarding house and then went on to work in a restaurant until 1920. At that time, Anna decided to move to the West Coast, settling in Everett, Washington. Anna quickly found another job as a waitress and joined the Cooks and Waitress Union as a way to make friends. In Everett, Anna was also reacquainted with a man named Frank Johnson, whom she had first met in church in Minnesota. Frank was of Swedish heritage and had served in WWI. Anna and Frank were married a year and a half after they met in Everett and remained in the city until 1945, during which time Frank worked at a sawmill and Anna continued to work as a waitress. The couple had three children: Rudolph, Clifford, and Roger, and Anna always made sure she was home when the children were, firmly believing in the necessity of a sound home-life. In 1945, the family bought a share of Puget Sound Plywood Co. and moved to Tacoma. Frank worked at the plywood company until he had a heart-attack in 1953. Through the years, Anna has been a part of the Vasa Lodge and has been very involved in the Lutheran Church. She was also the President of the Widows of WWI group. Anna is proud to be Finnish and has visited Finland four times, once with Frank in 1954 and three more times on her own.