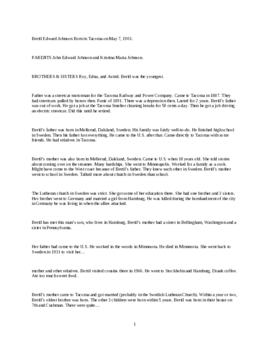 Bertil Edward Johnson was born on May 7, 1901 in Tacoma, Washington. Bertil's parents, John and Kristina Johnson, moved to Tacoma from Sweden. They married and had four children, Bertil being the youngest among two boys and two girls. The Johnson family lived in a Scandinavian community where the language and customs were preserved. Bertil began working after school and on the weekends at the age of thirteen. While attending Stadium High School, Bertil worked for the Tacoma Butter Store; he worked for one year after graduating in 1919 in order to save money for college.

Bertil then attended the University of Washington for five years and studied law. He passed the bar exam in 1925 and was appointed Assistant U.S. Attorney in Tacoma in 1926. After 13 months, Bertil was appointed Prosecuting Attorney for Pierce County from 1927-1935. Bertil opened a private practice in 1935, where he worked until 1951 when he became a judge. As a judge, Bertil worked with a lot of respectful Scandinavian people from the area who were attracted by Bertil's ability to speak Swedish. Bertil also worked with the juvenile court and came across many controversial juvenile cases.

Even though Bertil was not born in Sweden, he has been very active in the Scandinavian community; he belongs to the Swedish Order of Valhalla and the Scandinavian Fraternity and at one time participated in the Swedish Order of Vasa and the Scandinavian Old-Timers. He attends a Swedish Lutheran Church, where he has served as the superintendent of Sunday school and as a member of the board of trustees. Bertil has been involved in many non-Scandinavian organizations as well: the Elks, Tacoma Lions Club, Tacoma Boys Club, United Good Neighbor Fund, the Salvation Army, and the Allenmore Medical Foundation. Bertil has three children with his wife Pearl Tate. He appreciates the life he has led and is thankful for the work and the opportunities that have helped him achieve success.