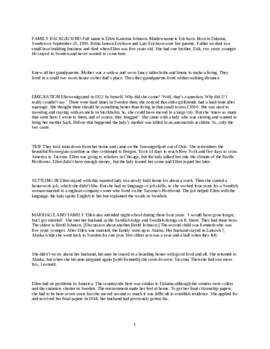 This interview conducted with Ellen Johnson on April 19, 1979 in Tacoma, Washington contains information on personal background, emigration, work, marriage, and return trips to Sweden. The interview was conducted in English.

Ellen Katarina Johnson (Eriksson) was born in Dalarna, Sweden on September 20, 1900. Ellen's father died when she was five, and she lived with her mother and brother in a small house near her grandparents. In 1922, Ellen moved to the United States by herself in search of a better lifestyle than what she had seen in Sweden. A woman on the trip persuaded Ellen to move to the Pacific Northwest, despite Ellen's intentions to settle in Chicago with relatives. Ellen chose to settle in Tacoma and immediately found work as a housekeeper. She started attending night school, but Ellen learned most of her English skills from the woman who employed her. At the Swedish lodge, Ellen met her husband, and the two of them had three boys. The family moved to Alaska for a short time, but Ellen decided to live in Sweden for a year while her husband worked. She attained her United States citizenship in 1944. Ellen did not forget her Swedish roots though; she kept in contact with her cousins and returned for visits in 1929 and 1961. Ellen also cooks traditional Swedish fare during the holidays. She can still remember some of the language and maintains pride in her Swedish heritage.