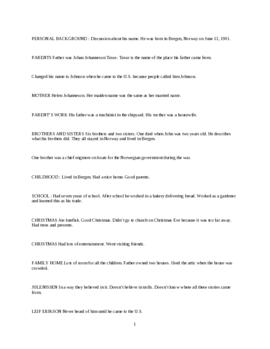 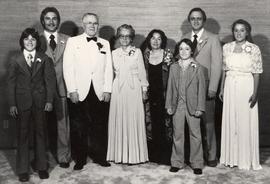 The interview was conducted with John Johnson on September 30, 1981 in Tacoma, Washington. Mr. Johnson was recovering from a stroke at the time of the interview. Also his wife had died in June 1981 so it was difficult for him to remain composed. This interview contains information on family history, childhood, school, Christmas traditions in Norway, emigration, military service, church in the U.S. and Norway, confirmation, voyage to America, Ellis Island, train trip to Tacoma, work in the U.S., life in Tacoma, learning English and language difficulties, citizenship, changes in Bergen (Norway), marriage, children and grandchildren, involvement in Scandinavian organizations, trips to Norway, his stroke, and wife's cancer and death. On the tape there is a bit of wandering, as Mr. Johnson goes from topic to topic. The interview was conducted in English.

John Johnson was born in Bergen, Norway on June 13, 1901, and his parents were Johan Johanneson Tøsse and Helena Johanneson; his mother's married name was the same as her maiden name. John had six brothers and two sisters. As a child, he lived in Bergen and went to school from age 7 to 14; he finished school and was confirmed in Norway. After school, he worked in a bakery delivering bread, as a gardener, and for one of the biggest tanneries in Norway. He also fulfilled his compulsory military service in the army. He left Norway aboard the 'Bergensfjord' on July 22, 1923 and took the train from New York straight to Tacoma, where a cousin met him. He changed his name from Johanneson to Johnson after arriving in the U.S. John worked at a lumber company in Tacoma digging ditches for a number of years and on the green chain at a sawmill for a while as well. He met his wife, Gudrun Blutcher, at a mixed choir of the Sons and Daughters of Norway, and they married on June 29, 1929 in a Lutheran church on 38th Avenue in Tacoma. Gudrun had come to the U.S. with her family in 1920, and her grandfather was German. They had two sons, Norman and Clarence. Norman, the older son, belonged to the Marines and was killed in the Korean War shortly after he arrived; he was 19 years old. Clarence is married and has four children; he has been a teacher and counselor and now works as a building contractor. John is active in Bethlehem Lutheran Church in Tacoma and has taken trips back to Norway in 1953 and 1968. He received his citizenship in 1937. He is a life member of Sons of Norway, joining in 1924 and again in 1943, and sang in the Norwegian Male Chorus for 54 years. He had a stroke during Thanksgiving 1979, and his wife died of cancer.