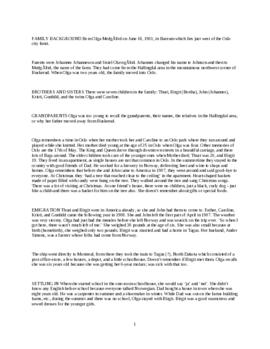 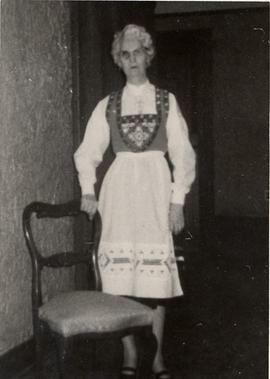 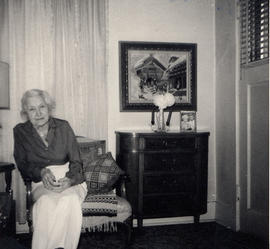 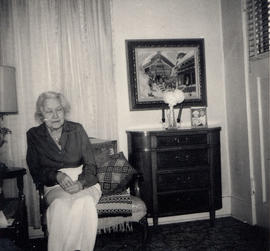 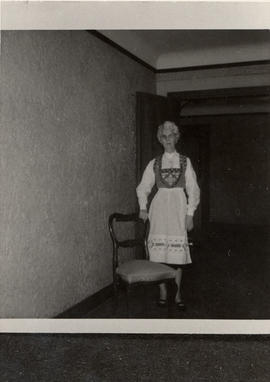 The interview was conducted with Olga Johnson on March 7, 1983 in Tacoma, Washington. This interview contains information on family history, memories of Oslo, Christmas traditions in Norway, emigration, voyage to America, settling in, school, marriage and family life, children, move to Washington, life in Tacoma, activities and work, and Scandinavian cooking. Also available are photographs of Olga Johnson in traditional Norwegian dress and Olga at the time of the interview. The interview was conducted in English with some Norwegian towards the end of the tape.

Olga Medgaard Johnson was born on June 18, 1901 in Baerum, Norway, which lies just west of the Oslo city limits. Her parents were Johannes Johanneson Medgaard and Sissel Olavsgaard; Medgaard was the name of the farm. There were seven children in the family, and Olga and her twin sister Caroline were the youngest. The family moved into Oslo when Olga was 2, and her mother died when she was 4.

Olga emigrated with her brother John in early April 1907; her oldest sisters, Thuri and Birgit, were already in America, and her father and remaining siblings emigrated in 1908. The ship went directly to Montreal, Canada, and she and John took the train to Tagus, North Dakota, where Birgit lived with her husband, Anders Simon. Olga's father was a shoemaker in the winter, and Olga stayed with Birgit while he did carpentry work in the summer. Olga went to school through the eighth grade and went to her sister Thuri's to help take care of the children after she was confirmed.

Olga did housework for a while until she met her husband, Carl Johnson; Carl was from Minnesota and had a farm near Stanley, North Dakota, where Thuri lived. They married in 1920 at the parsonage in Minot, North Dakota. They farmed for a while, took over his uncle's farm after he died, and later moved into Stanley where Carl did cement and carpentry work. They had two children-Alvin John, born on August 6, 1924 in Carpio, North Dakota, and Karl Norman, born on October 6, 1931 in Stanley.

Olga and Carl lived in North Dakota until 1937, but there was nothing in North Dakota during the Depression so the family moved to Tacoma around July 4, 1937. Thuri's oldest son, Oscar Frederickson, lived and worked in Tacoma, and they lived with him for a few weeks until they found a house. Carl found a job in a Tacoma lumber mill almost immediately and later worked in the Tideflats area. Olga raised the boys and took care of the house and her husband, but she worked at Pierce County Hospital preparing patients for surgery during WWII and later did housekeeping and a variety of other jobs at Pacific Lutheran University in Tacoma. Carl died around 1951. Olga has remained active in the Lutheran church and the Sons of Norway; she is a life-member and has served as an officer many times in the Sons of Norway.