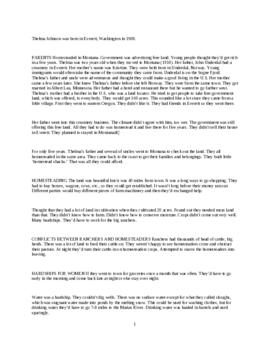 The interview was conducted with Thelma Johnson on April 29, 1980 in Tacoma, Washington. This interview contains information on family history, homesteading in Montana, hardships for the women while homesteading, wildlife, gardens, community and school in Montana, life after school, marriage, work, move to Tacoma, church, Scandinavian organizations, Leif Erikson Committee and Scandinavian Days, and visit to Norway. The interview also contains two articles from the Tacoma News Tribune about Thelma Johnson, one on wreath making (November 11, 1979) and one on her recipe for meatballs. The interview was conducted in English.

Thelma Irene (Underdal) Johnson was born on January 12, 1908 in Everett, Washington. Her parents were John and Kristine Underdal, and she had four brothers and sisters. Both John and Kristine were born and grew up in Underdal, Sogn, Norway, and Thelma grew up speaking Norwegian. Her parents moved to Montana in 1910 when Thelma was two years old and began to homestead 160 acres about 75 miles east of the Rocky Mountains; Galata, Montana was one of the closest towns. The Prospect School was only a mile away from her parents' farm, and Thelma completed all eight grades there, after which she attended high school in Galata for a year. Her parents moved to Portland, Oregon the next year so she went to high school there, but she went back to Galata the year after that and graduated.

She then went to a business school in Great Falls, Montana to become a bookkeeper, and she worked as a bookkeeper for a few months after finishing the school. She married a Norwegian man and moved to Banff, Alberta, Canada, where they lived for five years. They moved back to Montana in 1930, at the start of the Depression, and stayed there for eleven years. Thelma opened a craft shop in Shelby, Montana, and her husband was in the lumber business.

She moved to Tacoma in 1943; her husband moved to Tacoma to find a better job, found employment building houses, and Thelma closed down her shop and moved out a year later. Her husband died in 1949, and she remarried a Swedish man in 1958; both husbands were named Johnson.

She has been active in Bethel Lutheran Church in Tacoma and has belonged to Scandinavian Fraternity since 1958. She also joined Vasa, a Swedish organization for men and women, after she married the Swede and was president for three years. She has also been president of the Leif Erikson Committee, which started the Scandinavian Days festival in Tacoma, from 1966-80. She visited Norway in 1970 and spent time in Sogn, primarily in Høyanger, but she also went to Underdal, where her parents grew up; she visited Sweden and Denmark as well. Her second husband died in 1976.