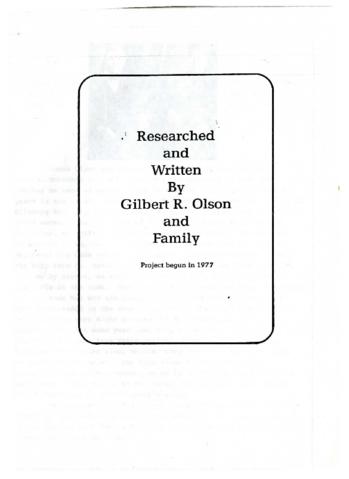 Consists of a manuscript describing the Olson family’s history beginning with Jonas (born 1831) and his wife Anna Britta Hed (born 1835). The manuscript talks about their lives as immigrants and pioneers in Minnesota. History about their daughter Josephine and her husband John Olson and their personalities and their children is also discussed.

Jonas Olson was born at Skaraborgs Län Westergötland, Sweden, on 27 November 1831. He immigrated to America in 1861 and in 1864 homesteaded in Alfsborg Township, Sibley County, Minnesota. Here he met and married Anna Britta Hed, born in 1835 to Mr. and Mrs. Johannes Hed. They farmed on their homestead, planting, cultivating, and harvesting with hand tools, usually homemade. The only fuel available was wood.

Jonas helped organized the first school and was elected to its first Board of Directors. The family lived on their homestead until 1908 when they retired and moved to Winthrop. They had nine children by this time. The children were all raised as devout Christians and abstained from alcohol. They were also all born without medically trained help, as the closest doctor was many miles away. Jonas’s and Anna’s daughter, Josephine (born on 31 October 1861, died 1926), married John Olson.

John Olson, son-in-law to Jonas and Anna Britta, was born on 30 October 1859 in Åsa in the province of Halland Sweden. John left Åsa at age eighteen in 1877 to go to America, first landing at Redwing, Minnesota. He had two brothers who immigrated to America, as well. John’s first job in America was working for an Irish farmer in Goodhue County just outside of Redwing. He then worked building a spillway on the Mississippi River for Pillsbury Flour Mills and then at a cabinet factory. He did this until moving to the farm in 1887.

John met Josephine Olson in 1883, who had come to the city to work as a house maid for wealthy families. They were married and had their first child in 1885. They were able to purchase land in Gibbon, Minnesota. Here they had eight more children. To make a living they farmed (hand cultivating with the help of horses) and sold eggs, butter, hogs, and wheat. All the children graduated from Knox College at grade eight. Two of the children went on to high school, and Olive was the only child to graduate from college. Two of the boys, Harry and Leonard, were called into service during World War I.