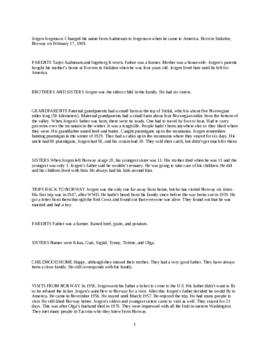 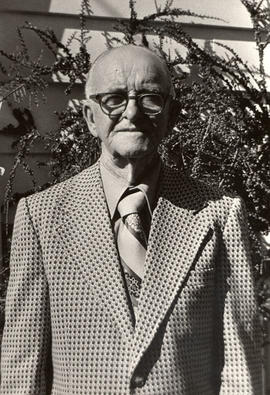 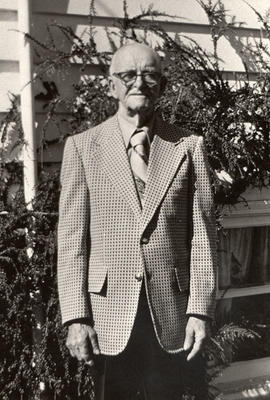 The interview was conducted with Jorgen Jorgenson on September 30, 1982 in Bellingham, Washington. This interview contains information on family history, trips to Norway, childhood home, father's visit from Norway, Norway after WWII, emigration, reasons for emigrating, voyage to America, work in the U.S., the Depression, work in Alaska, fishing in Alaska, learning English, meeting spouse, marriage and family, work during WWII, church, Christmas traditions in Norway, family in Norway, and trapping in Norway. The interview also provides two black and white photographs of Jorgen Jorgenson taken in 1982. The interview was conducted in English.

Jorgen Jorgenson was born Jorgen Aadneram on February 17, 1909 in Kvaeven, Sirdalen, Norway, the oldest child of Tarjei Aadneram and Ingeborg Kveven; Jorgen had six sisters. His father was a farmer, and his mother died when he was 11 years old. He left from Stavanger, Norway on March 5, 1929 and landed in Halifax, Canada, sixteen days later. He had an uncle living in Tacoma, Washington who arranged Jorgen's papers, and he traveled with a friend, Anton Austad. They took the train to Vancouver B.C., entered the U.S. on March 28, and went directly to Bellingham, Washington

Jorgen started working for Bodell & Donovan, a logging camp about thirty miles out of Bellingham, on April 18, 1929 and stayed there until all the logging camps in Washington State were shut down on July 4, 1930. He worked on a farm in Mt. Vernon, Washington in 1932 and then decided to go to Nome, Alaska, where he got a job at Plaster Gold Mine, located at Bluff (?), which was sixty miles west of Nome. He did not return to Plaster in 1933 and started working for Bodell & Donovan in Bellingham in the logging camps again off and on until 1941. He also fished in Alaska from 1934-37; again in King Cove, near the Bering Sea, from 1939-41; and started working in Cold Bay, Alaska in 1941 before WWII broke out. He worked for Morrison & Knudsen (?) in Alaska for two years during the war, doing carpentry work.

He met his wife, Florence, when he came down from Alaska in 1943, and they married fourteen days after they met. Florence was born in Bellingham, but her mother was Norwegian. Jorgen went back to Alaska and worked for six months. He was then drafted, but due to an eye injury he received in 1933, the Army did not take him, and he returned to Bellingham, where he worked in a shipyard for a while. He and Florence had one son, Terry, born on November 3, 1944 (?) in Bellingham.

They bought a farm in Clipper, Washington and lived there until 1946, at which time they sold the farm and Jorgen built a house in Bellingham. Jorgen did carpentry work, worked for a company in Seattle for seven years before he retired, and now manages thirty apartment units. He became a citizen in 1937, and he and his wife belong to St. John's Lutheran Church in Bellingham. He has visited Norway six times, the first time in 1947.