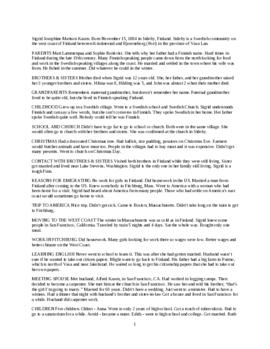 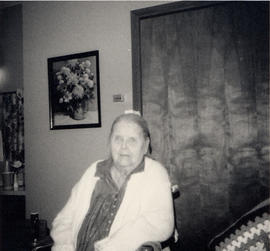 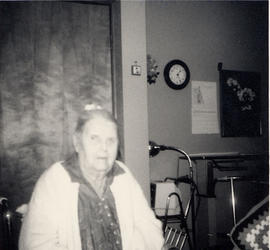 Sigrid Kasen was born on November 15, 1884 in Sideby, Finland, which is a Swedish community on the West Coast of Finland. Her parents were Matt Lammenpaa and Sophie RÃ¶nnkvist, and Sigrid had three younger siblings: Hilma, Hilding, and John. Sigrid's mother passed away when Sigrid was twelve, and she helped her father raise the other children. In Sideby, Sigrid attended a Swedish school and church, and her family spoke Swedish in their home. Sigrid understands Finnish but cannot converse in it. In 1909, Sigrid immigrated to the United States due to curiosity and lack of work for young girls in Finland. She knew someone in Fitchburg, Massachusetts and went there first. After one winter in Massachusetts, she moved to San Francisco, California and did housework. While living there, she met her husband, Alfred Kasen. Alfred was also from Finland and did carpentry work. After they were married, Sigrid and Alfred moved to Seattle, Washington, and they had five children: Anna, Astrid, Edith, Ruth, and Melvin. Sigrid has returned to Finland once and her heritage is very important to her. Nevertheless, she is very glad she came to America.