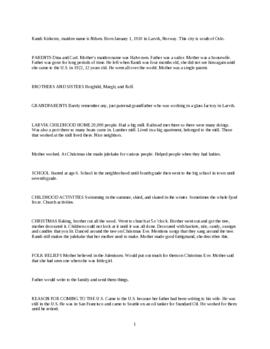 The interview was conducted with Randi Kirkemo on August 4, 1982 in Tacoma, Washington. This interview contains information on family history, Larvik and childhood home, school in Norway, childhood activities, Christmas traditions, emigration, voyage to America, Ellis Island, first impression of U.S., school in America, new experiences in U.S., impressions of Seattle, settling in, church, marriage and family, visit to Norway, and Norwegian heritage. The interview was conducted in English.

Randi Nilsen Kirkemo was born on January 1, 1910 in Larvik, Norway, a town south of Oslo. She had three brothers and sisters, and her parents were Dina and Carl Nilsen. Her father was a sailor and left home when Randi was 4 months old; she did not see him again until she came to the U.S. when she was 12. She started school at age 6. Her father had been writing to her mother from the U.S., and Randi, her mother, and her sister Margit left from Larvik on July 22, 1922. They stayed with friends in Oslo until the boat arrived and took the 'Stavangerfjord' to New York. They took the train and stopped in St. Paul, MN; Randi's aunt lived in Clear Lake, WI, and they visited her there for seven to ten days. They then reboarded the train and her father met them in Seattle. He was working on an oil tanker for Standard Oil in the Puget Sound, and they lived in a house he had bought in West Seattle. Randi was put in first grade when she started school in September, but she quickly moved up to the grade she had been in when she left Norway. She met her husband when she was 16, and they went together for three years. He lived in Tacoma and was from Horten, Norway, which is near Larvik; he changed his name from Johansen when he first arrived in the U.S. Randi went to West Seattle High School and got a part-time job in an office at a school, but she quit when she was a junior because she knew she was going to get married. She and George married in a Methodist church in West Seattle in 1929 and then moved to Tacoma. They had one daughter, Diane, who was born on March 14, 1934 in Tacoma. Randi and George visited Norway in June 1963, but first went to England, Paris, and Copenhagen. George's brother and his wife met them in Oslo, and they stayed with them for about two and a half months.