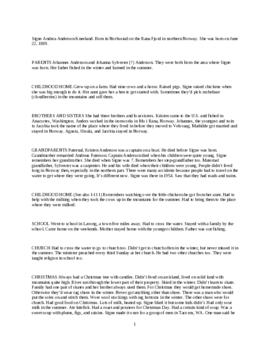 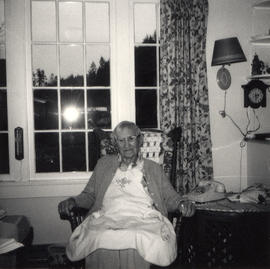 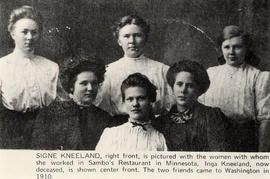 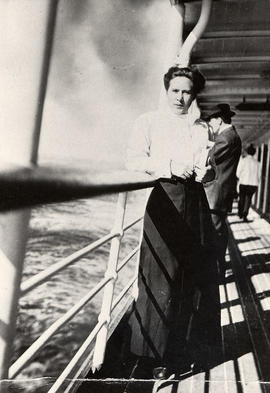 The interview was conducted with Signe Kneeland on November 15, 1982. This interview contains information on family history, childhood home, school, church, Christmas traditions, reasons for emigrating, voyage to America, arrival in the U.S., train trip to Minnesota, first impression of the U.S., differences between the U.S. and Norway, work in the U.S., meeting spouse, marriage, children, learning to drive, community involvement, trip to Norway, Norwegian heritage, and helping her brothers immigrate to the U.S. The interview also includes a photograph of Signe Kneeland in transit to California, two photographs reproduced from the local newspaper article 'She Came From Norway,' and two photographs of Signe at the time of the interview. The interview was conducted in English.

Signe Andrea (Anderson) Kneeland was born on June 26, 1889 in Norbostad, on the Rana Fjord in northern Norway. She had three brothers and four sisters, and her parents were Johanna and Johannes Anderson; her father fished in the winter and farmed during the summer. Signe grew up on the farm and went to school in Lavong, a town five miles away. Her mother died around 1899, and Signe immigrated to America without her family when she was thirteen. She reached Trondheim, Norway, on April 1, 1903 and traveled with a woman named Nikoline, who was also on her way to the U.S. They landed on Ellis Island, took the train to Montreal, Canada, and then on to Minnesota. Signe was taken to Irvin (?), MN, where she worked for the Thomas Nilsen family for three years. She was confirmed while in Irvin and went to school for three months when she first arrived in the U.S. After leaving the Nilsens, Signe did some housekeeping and then got a job in Willmar, MN, in a hotel. She worked for a Danish family, the Fritz Nilsen family, in Atwater, MN, for about six months. She then went back to Willmar, where she worked at Sambo's Restaurant and met Inga Tollefson. They both worked at Sambo's until it went out of business and then held a few other jobs. They took a train excursion to Washington State in 1910 and decided to stay in Washington because the trees reminded Signe of Norway. After visiting a few friends and relatives in Anacortes, WA and Parkland (Tacoma), WA, Signe got a job in a boarding house and Inga worked for a family in Tacoma. Inga then went to Shelton, WA, where she met the Kneeland family. Signe visited her in Shelton and also met the Kneeland's, and then went to California for four months before returning to Shelton. By 1911, Inga had married one of the Kneeland's, and Signe worked in Shelton for W.H. Kneeland after Inga married. Signe married Alan Kneeland, a logger who was born in Paten, Maine, in October 1912, four months after they met. Alan and Signe lived in the Shelton area and had four sons: John, Alpheus, George, and Joseph, who died around 1979. Her husband was killed in an accident in 1922 when their youngest child was one and a half; Signe raised her children alone and has lived by herself after his death. She had to learn to drive after Alan died, and she drove children to school for ten years. She moved back into Shelton in 1951 and worked as a custodian in the courthouse for six years until she could start collecting Social Security. She belonged to the Grange and the Democratic Club and visited Norway in 1954. She helped two of her brothers immigrate to the U.S.; Kristen came in 1908 when Signe was working for the Danish family in Minnesota, and her younger brother John came in 1924.