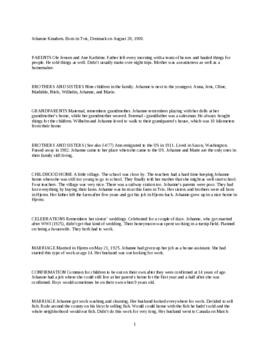 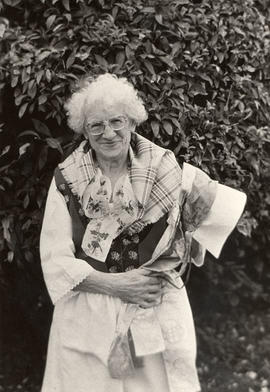 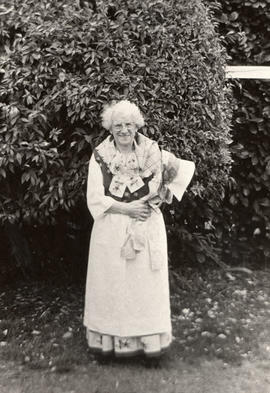 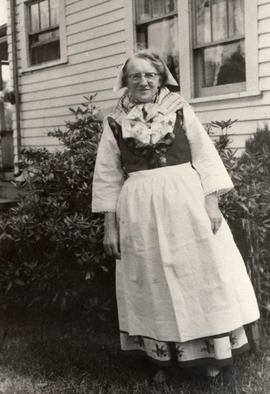 This interview was conducted with Johanne Knudsen on October 26, 1982 in Bellingham, Washington. It provides information on family background, emigration, marriage and family, farming, and Danish heritage. The interview also includes a photograph of Johanne in 1958 and two of her in 1982, wearing the same traditional outfit as in the1958 photograph. The interview was conducted in English.

Johanne Knudsen was born on August 28, 1900 in Tvis, Jutland, Denmark to Ole Jensen and Ane Katherine Nielsen. Her father drove a team of horses and hauled things for people, and her mother was a seamstress. Johanne had eight siblings and was the next to youngest in the family. Johanne was confirmed when she was fourteen and then got a job as a house assistant. She gave up this job when she married Jorgen Knudsen on May 21, 1925. In an effort to find work, Jorgen went to New Brunswick, Canada on March 21, 1927, and Johanne joined him the following November. They lived in Grand Falls, New Brunswick for six months and then bought a farm beyond a Danish settlement known as New Denmark. They remained at this farm for ten years and had two children, Else and Bob. The family left New Brunswick in order to help Johanne's sister Anna in Saxon, WA. Anna and her husband were getting too old to run their own farm and thought Johanne and Jorgen could help them out. Johanne and Jorgen rented the farm and went through some very tough years, clearing the land and making the farm productive again. Eventually, Jorgen wanted to learn another trade and began attending Western Washington State College in Bellingham. He became a first class welder and got a job in at the Everett shipyards. While Jorgen worked in Everett, Johanne and the children decided to remain at the farm. Johanne loved living on the farm and stayed there for twenty-six years. Johanne has made several trips back to Denmark and continues to keep in touch with her friends there. She never had time to join any Scandinavian organizations, but is a member of Faith Lutheran Church and the grange in Saxon.