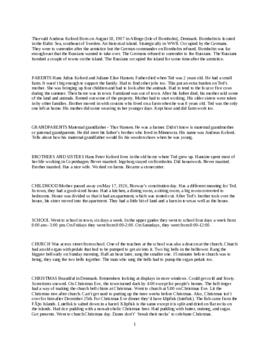 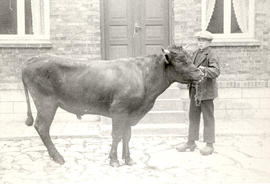 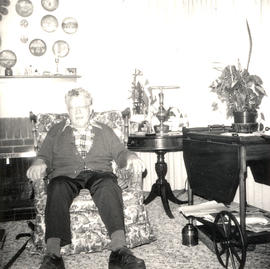 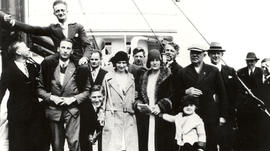 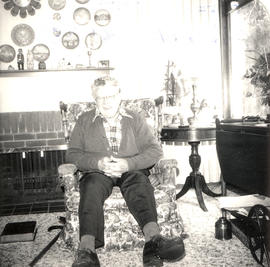 This interview was conducted with Thorvald Kofoed on April 22, 1983 in Seattle, Washington. It provides information on family background, employment, emigration, marriage and family, community activities, and Danish heritage. The interview also includes the announcement of Thorvald's 75th birthday in Bien, the text of several speeches given by Thorvald, a Danish Brotherhood newsletter, and photocopies of photographs of Thorvald's school, church, and home in Denmark and he and his wife in 1982. In addition, actual photographs of Thorvald when he was fifteen, Thorvald on a boat, and Thorvald at the time of interview are available. The interview was conducted in English.

Box 11, File 2B Photographs and Personal Papers
Four photographs
Article from the “Bien”
Speech for the 92nd Anniversary of D.B. Lodge #29, April 12, 1980
Speech for the 90th Anniversary of D.B. Lodge #29, April 9, 1978
“Department Chaplain”
Copies of pictures with handwritten descriptions
Seattle Lodge No. 29, “The Danish Brotherhood in America” Newsletter

Thorvald (Ted) Kofoed was born on August 18, 1907 in Allinge, Bornholm, Denmark to Hans Julius Kofoed and Juliane Elise Hansen. Ted had three older siblings, and his father died when Ted was only two years old. The family had a small farm, but it was not enough to support the family, and Ted's mother had to start working outside of the house. Before Ted was confirmed, he worked in bakeries and cabinet shops after school, but his mother could not afford an apprenticeship for him, so he had to go out and work when he turned fourteen. He began farming and learned to milk cows, harness horses, plow, and anything else that went along with the business.

Ted's mother passed away on May 17, 1926, and when Ted's uncle came to visit from America, Ted began to consider immigrating as well. He left Denmark in 1930, settling at his uncle's house in Shevlin, Minnesota. Ted stayed with his uncle for three months and then became a hired hand at a local farm. He worked at the farm for several months, but when he found an ad in 'The Pioneer,' the Danish newspaper, asking for a hired hand on the West Coast, Ted decided to move west. He worked on a farm in Sequim, Washington for three months and then went to Seattle, where he was employed at a dairy farm for four years.

In 1936, he spent the summer digging for gold in Alaska but then came back to Seattle and became doing carpentry work. In 1942, Ted joined the U.S. Army and served for three years. He did his basic training for the military police, but when his battalion reactivated, he was transferred to quartermaster. When he finished his commitment to the Army, Ted returned to Seattle and became a carpenter at Frederick and Nelson. He also met his wife, Virginia Carol, and was married in 1949. They had one son, Hans Frederick.

Through the years, Ted has been active in Crown Lutheran Church, where he has served as Treasurer, Deacon, and on the council. He is also a member of the American Legion and the Danish Brotherhood. In 1976, when Ted was President of his lodge, he became the editor of their Danish newsletter. Ted's only trip back to Denmark was in 1972, during which the visit to Bornholm was the most meaningful portion of the trip.