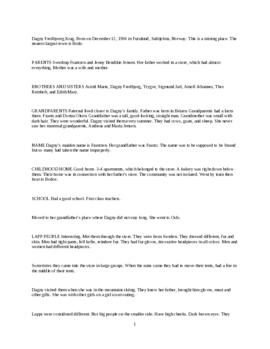 The interview was conducted with Dagny Krag on January 28, 1982 in Tacoma, Washington. This interview contains information on family history, childhood home, Lapp people, Lappish language, Christmas traditions, church, life before moving to the U.S., WWII in Norway, emigration, voyage to America, first impressions of the U.S., settling in, Daughters of Norway, trips back to Norway, Norwegian heritage, changes in Norway, northern Norway, and copper mining in Sulitjelma. The interview was conducted in English.

Dagny Fredbjørg (Frantzen) Krag was born on December 12, 1906 in Furuland, Sulitjelma, Norway, and a mining town near Boedo. She was one of seven children by Jenny Bendikte Jensen and Sverdrup Frantzen; her father worked in a store. She went to school and was confirmed in Sulitjelma, and when Dagny was 15, the family moved to the paternal grandfather's farm in Beiarn after he died. Dagny stayed at the farm for a few years and then lived with an aunt for a while. She went to Oslo by herself and got a job in an insurance company. She met her husband, Frithjof Krag, through his brother, and they married in 1931; Frithjof was a businessman and worked for a newspaper interviewing people. Their daughter, Asta Marie (Krag) Marquardt, was born on March 20, 1932 in Oslo. Frithjof died in 1938, and Dagny and her daughter lived with her parents after WWII, during which time Dagny worked in a shop. Dagny had three aunts living in the U.S., and one encouraged her to come to the U.S. Dagny emigrated with her daughter, leaving Norway aboard the 'Stavangerfjord' on May 2, 1950. They landed in New York, and, because of a railroad strike, they took the bus to Tacoma, where an aunt met them on May 17. They lived with this aunt and uncle in downtown Tacoma, and Dagny got a job at Almar Aires (?), a ladies' clothing store downtown; she also went to Lincoln School and learned to speak English. She is an active member in Daughters of Norway, joining in 1952, and has been an officer; she also belongs to Nordlandslaget, a special group of people from Trøndelag, in northern Norway. She has taken six trips back to Norway; the first time was in 1959, when she stayed for four months, and her last trip was in 1980.