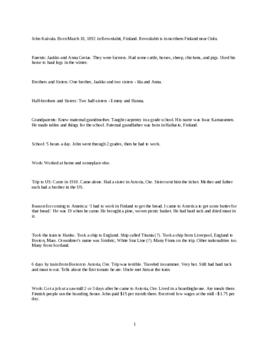 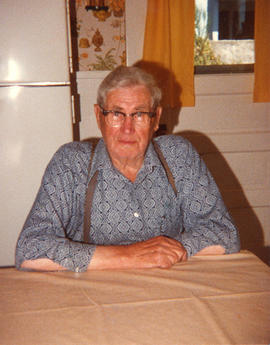 This interview was conducted with John Kuivala on August 28, 1981 in Astoria, Oregon. It provides information on family background, emigration, employment, marriage and family, and Finnish heritage. The interview also includes a photograph of John at the time of the interview.

Box 4, File 6B Photographs
One photograph

Biographical Information John Kuivala was born on March 18, 1892 in Revonlahti, Finland to Jaakko Kuivala and Anna Gretas. John's parents were farmers, and he had three siblings: Jaakko, Ida, and Anna. John also had two half-sisters, Emmy and Hanna. John attended school for two grades and then he had to join the work force.

In August 1910, he decided to immigrate to America, settling in Astoria, Oregon, where one of his sisters lived. In Astoria, he obtained a job at a sawmill and lived at a boardinghouse. The language barrier was difficult for John at first, but he studied a little bit in a night school and gradually learned English.

In 1915, John married Elna Toivonen, who was originally from Halikko, Finland. After he got married, John got a job building passenger ships and then became a longshoreman. He also fished in Alaska during the summers until 1932. John and Elna had two children, Easter and Toivo, and remained in Astoria. They spoke Finnish in their home, which the children also learned. John belongs to the Finnish Brotherhood and is proud of his heritage. Nevertheless, he is glad he came to America, which saved him from having to fight in two wars in Finland.