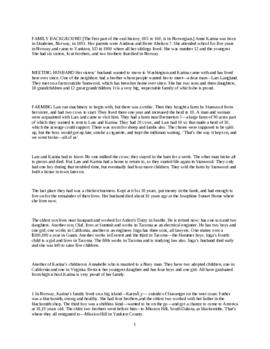 This interview was conducted with Karina Langland on June 8, 1978 in Stanwood, Washington. It contains information on family history, farming in Washington, children, life in Norway, family's immigration to U.S., voyage to America, life in South Dakota, meeting spouse, life in Washington, political involvement, Norwegian traditions, and church. This first portion of this tape is recorded in Norwegian.

Anne Karina Abelson Langland was born on August 30, 1891 in Skudenes, Rogaland, Norway and was the youngest of twelve children by Andreas and Berte Abelson . Her father was a blacksmith, and the family lived on Karmøy, a large island outside of Stavanger on the west coast; two of her brothers died and are buried in Norway. Her siblings began to immigrate to Mission Hill in Yankton County, South Dakota, and Karina left Norway with her parents around 1900-01; they were the last family members to emigrate and entered the U.S. through Boston.

Karina had started school in Norway and continued to attend in Mission Hill. She first lived with a brother and his wife while her parents lived with another sibling, but her parents later bought a house. She came to Stanwood, Washington with her parents and a sister and her husband when Karina was nineteen, and she met her husband, Lars Langland, who was the brother of a neighbor, in Stanwood; they married when she was 22.

They bought a farm in Stanwood from one of Karina's sisters and then rented a farm in Bremerton from a man and woman whom Lars knew; they ran a cow farm with the couple, but the farm went broke and they returned to their Stanwood farm. They later sold the farm outside of Stanwood and bought a house in town. They started a chicken business after losing the cow farm, and they ran it for thirty years.

They have two sons and three daughters, eighteen grandchildren, and twelve great-grandchildren. Karina became a precinct committee person for the Democratic Party and registered voters, and she was on the election board for thirty years; she was also active in church. She has never visited Norway and now lives in the Josephine Sunset Home. Lars died around 1968.