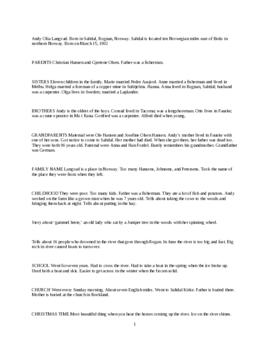 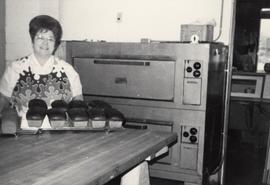 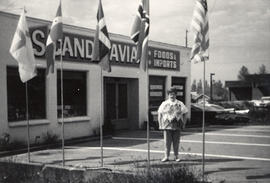 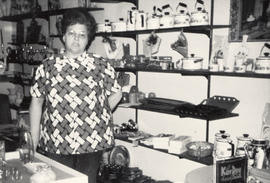 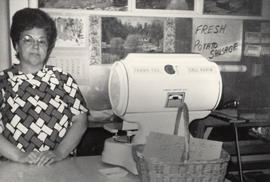 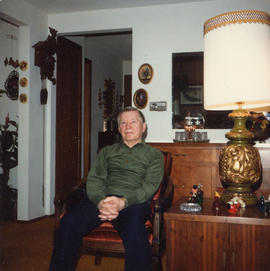 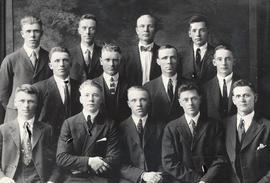 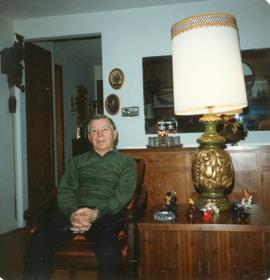 The interview was conducted with Andreas (Andy) Langvad on February 17, 1982 in Tacoma, Washington. This interview contains information on family history, family name, childhood life and home, school, church, Christmas traditions, work in Norway, home remedies, toys, preparation for emigrating, working in a copper mine, voyage to America, trips to Norway, feelings about leaving Norway, first impression of America, work in the Midwest, language difficulties, reasons for moving to the West Coast, work in Washington, meeting spouse, marriage and family, Scandinavian import store, Norwegian organizations, Norwegian traditions, church in Washington, changes in Norway, effects of WWII on northern Norway, and Norwegian heritage. The interview also provides a photograph of Andreas Langvad, his brother, and other immigrants from Langvad-Lien (1923), four photographs of his wife, Jean Langvad, at their Scandinavian store in Tacoma, Washington, and two photographs of Andreas at the time of the interview. The interview was conducted in English.

Andreas (Andy) Olia Langvad was born on March 15, 1902 in Saltdal, Rognan, Norway, which is ten Norwegian miles east of Bodø in northern Norway. He was one of eleven children by Christian Hansen and Gjertene Olsen; Andy changed his name to Langvad, the name of a place in Norway, when he left home. He went to school for seven years, and, every Sunday morning, the family went to the Saltdal Kirke (church), which was about seven English miles from home. He worked in a copper mine the summer he was fourteen and left home when he was fifteen. He made cod liver oil in northern Norway for a year and returned home, but he left a week later for the West Coast of Norway.

He got a job in Sundnes, near Stavanger, in the same shipyard where his cousin, Johan Langvad, worked. Johan decided they should emigrate, and they left Oslo on the 'Bergensfjord' on May 10, 1921; they entered the U.S. at Ellis Island and took the immigrant train to Wisconsin. Andy first got a job digging ditches for the Water and Light Company in Superior, Wisconsin, which is close to Duluth, Minnesota. Johan became a longshoreman on Lake Superior, and Andy later got a job as a waterboy with the same outfit. In addition, they would work in the woods in Minnesota for about six weeks when there was not much longshoring, and Andy did this work in the woods for about thirty years.

While in Wisconsin, he worked as a longshoreman and cooper and he sewed flour sacks; he also had a store for a while. One winter, he went to Cleveland, where Johan was, and worked for about three months at a place in Cleveland that made furnaces.

Andy had a brother in Bremerton, Washington and moved to Washington State in 1947. He got a job in a lumber mill in Tacoma, WA and later worked at a plywood plant for twenty years. He met his wife, Jean Kingsley, at a restaurant in downtown Tacoma, and they married three years later on November 10, 1950; Jean was not Norwegian and was born in Fargo, North Dakota. She had one daughter and two sons-Carol Jean, Peter, and Danny-and Andy adopted them; Andy had also been married in Wisconsin and had one daughter, Audrey Mae Langvad Danielson, from that marriage.

Andy bought a Scandinavian import store from Waldemar Lind, a man he knew from the plywood plant, and they sold imported gifts and food; Jean did the baking for the store, but it eventually was too much work for too little profit, and they sold the business.

Andy belongs to Sons of Norway and Nordlandslaget and has attended Bethlehem Lutheran Church; he retired from the plywood plant in 1967. He has visited Norway in 1956 and 1972; during the 1956 visit, he also traveled to England, France, Sweden, and the rest of Europe except for Greece and Russia.