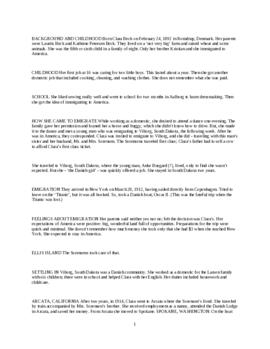 Clara Larsen was born on February 24, 1892 in Romdrup, Denmark. She grew up on a small farm and was the fifth of six children. As a teenager, Clara worked as a domestic, which included cooking, cleaning, and washing dishes. While she was working as a domestic, she met a young man who was immigrating to Viborg, South Dakota, and once he was in America, they corresponded.

Clara was eventually invited to immigrate to Viborg as well and traveled with the man's sister and her husband, Mr. and Mrs. Sorenson, in March of 1912. They originally tried to leave on the Titanic, but fortunately, no tickets were available. Viborg was a Danish community, and Clara stayed there for two years. Following Viborg, she moved to Arcata, California, where the Sorensons lived and worked as a domestic there.

In 1916, she moved to Spokane and lived with Mr. and Mrs. Jensen, whom she had met on the boat trip over from Denmark. While in Spokane, she joined the Danish Lodge and met her husband, Swan Larsen, in the spring of 1917. He was a butcher in Wallace, Idaho, and they were married July 30, 1917. That November, Swan went into the military, and they moved to Tacoma, Washington, where he was stationed.

While living in Wallace, their second child, Leona, was born on August 23, 1922. Clara did not go back to work until the children were married. She was fifty years old by that time and decided to work in the alteration departments of various clothing stores. Sewing had always been a favorite pastime of Clara's, and she was still working as a seamstress when she was eighty-one. Since emigrating, Clara has returned to Denmark six times, but contends that after living in America for so long, she is thoroughly American.