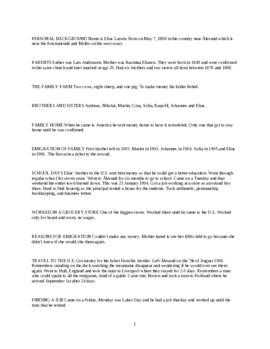 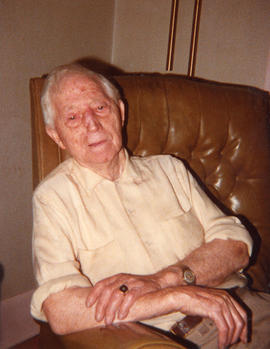 The interview was conducted with Elias Larsen on August 27, 1981 in Portland, Oregon. This interview contains information on family history, family farm in Norway, emigration of family, school days in Norway, work in Norway, reasons for emigrating, voyage to America, work in the U.S., language problems, community involvement, lumber industry, marriage, medical care, Christmas traditions, visits to Norway, Norwegian language and heritage, childhood in Norway, and reflections on immigration. Also available are a photograph of Elias Larsen and an article from the Western Viking (April 29, 1983). The interview was conducted in English.

Elias Larsen was born on May 7, 1888 in the country near Ålesund, which is near Kristiansund and Molde on the West Coast of Norway; he was the youngest of eight children by Lars Andreasen and Rasmina Eliasen. Elias went to school for seven years, and he lived in Ålesund for six months to go to school; he worked at a grocery school as an errand boy while he attended this school. One of his brothers emigrated in 1902, and two other brothers and a sister emigrated in 1903, 1904, and 1905, respectively. Elias got the money to emigrate from a brother, and he left Ålesund on August 7, 1906. He entered the U.S. at Boston; took the train to Portland, OR, where his brothers lived, and arrived in Portland on September 1. He got a job at the Portland Lumber Company and worked there for about one year; he then worked at the Southern Pacific train shed and started doing carpentry work with one of his brothers in 1909. Elias joined the Good Templar Lodge and was active in it for ten years; he also belonged to Young People's Society and was a member of Sons of Norway for over fifty years. He met his wife, Karen Peterson, at the lodge, and they married in 1915; they lived in Portland and did not have any children. Elias attends a Lutheran church and has visited Norway several times; in October 1911, he went home for Christmas and stayed about six months, and he went again with his wife in 1920. He visited a third time in 1961, after his wife's death, and again in 1968.