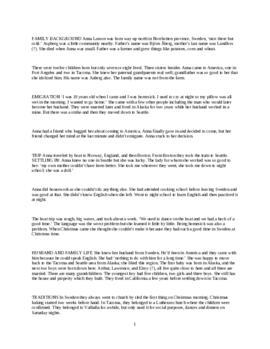 Anna Larson Åberg was born in the cold area of Aspberg, Norrbotten, Sweden on September 12, 1894. Anna was among twelve children born to her parents, but only seven or eight survived. Her father farmed for a living and raised the family on his own when Anna's mother died. One of Anna's friends encouraged her to move to America when she was 18 years old; Anna took her advice and traveled to the United States in 1912 with several other people, one of whom later became her husband. At first Anna settled in Seattle and worked as a housekeeper while attending night school to learn English. After marrying, Anna and her husband moved to Alaska where he could mine. When a couple of years had passed, they moved to California and then back to Washington, building a house in Tacoma. They had three children--Arthur, Lawrence, and Elroy-whom Anna tried to teach Swedish, but they didn't retain it after starting school. Anna especially loves the Swedish traditions surrounding Christmas, but she has had a hard time preserving all of the customs in the United States. Still, she and her husband were once members of Valhalla, and they returned to Sweden twice to visit relatives.